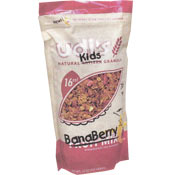 From: Udi's Handcrafted Foods
Introduced in 2009


This cereal was described on Udi's website as "anti-junk cereal for kids made with real strawberry and banana."

The packaging, designed by Katia Cone, is meant to imply that a kid took a sharpie, crossed out the adult stuff on the package and turned it into a kid's cereal. 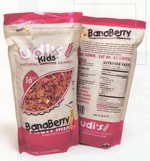 Submitter: Mr Breakfast
Uploaded: 3/13/2009
Additional details
Upload an image for this cereal
Comments About This Cereal
What do you think of BanaBerry Granola?
There are no comments yet for this cereal. Be the first! Was it good? Was it bad?
Do you have information not included in the article? Let the world know!