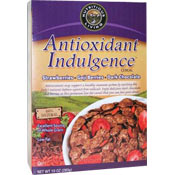 From: Nutritious Living
Introduced in 2008


A press release announcing the introduction of this product, dated March 14, 2008, described Anitoxidant Indulgence like this:

"Made with real dark chocolate, Goji berries and strawberries, this low fat, high fiber cereal packs an antioxidant punch in each delicious bite. Made with all-natural ingredients, each serving of Antioxidant Indulgence provides 16 grams of whole grains per serving and is a natural source of vitamin C, niacin, iron, magnesium and selenium."

Goji berries (aka Wolfberries) are primarily found in China. Before this breakfast cereal, for the last 1,900 years, they were used to make medicinal teas and Chinese tonic soups. The berries look like shriveled red raisins. They have a texture similar to raisins, although their taste is more tart like cranberries.

"According to recent scientific studies, antioxidants may play an important role in supporting the body’s immune system, response to inflammation, and many other metabolic processes that involve neutralizing free-radicals. We’ve designed Antioxidant Indulgence as a delicious, low-fat, whole-grain-based cereal made with three of the best sources of natural antioxidant compounds, including real Dark Chocolate, Goji Berries, and Strawberries. So you can indulge in great taste while knowing that you’re doing something good for your body - now that’s a radical concept!"


Click here to see all cereals from Nutritious Living.
This cereal belongs to the following Mr Breakfast Cereal Families:
Upload an image for this cereal
Comments About This Cereal
What do you think of Anitoxidant Indulgence?

I tried this one and I thought it was great. Real chocolate flavor and lots of it. I haven't been able to find it in some time now. Can you guys tell me if it's still being made? Thanks! - Kay O.