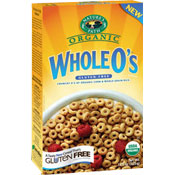 From: Nature's Path
Introduced in 2009


This cereal described itself on the box like this: "Gluten-free Crunchy O's of Organic Corn & Whole Grain Rice... A tasty new cereal that's gluten free - Enjoy your breakfast." The cereal looks, tastes and feels like Multi-Grain Cheerios, a cereal introduced by General Mills in 1991.

Upload an image for this cereal
Comments About This Cereal
What do you think of WholeO's?
There are no comments yet for this cereal. Be the first! Was it good? Was it bad?
Do you have information not included in the article? Let the world know!