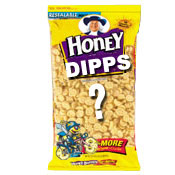 From: Quaker
Introduced in 1999


Very little information exists about Honey Dipps cereal, a HoneyComb knock-off from Quaker. It was on store shelves around the turn of the 21st century.

According to Topher's Breakfast Cereal Character Guide, the cereal's mascot was a bicycle-riding bee named Joe Bag-bee. The character's bike tires were the HoneyComb-shape of Honey Dipps cereal.

There are conflicting accounts regarding the cereal's nutritional profile. One source indicated the cereal contained 36.36% sugar by weight, which is at odds with information from nutritionpedia.com which placed the cereal's sugar content at 12 grams per 1.25 cup serving. Nutritionpedia.com also placed the iron content of the cereal at 139% Daily Value. This is likely a mistake since most cereals of a HoneyComb nature offer 15%.

As stated on Malt-O-Meal's website, "Compare Honey Buzzers to HoneyComb. Great taste, all the same vitamins and minerals — the big difference is the price. Try it today! Great Taste, Better Value!"

It is unknown whether Honey Dipps and Honey Buzzers share the same or similar recipe, but there's reason to believe they might. Malt-O-Meal has also produced HoneyComb-style cereal for the Our Family Store Brands Program which sold under the name Honey Crunch. There's reason to suspect this is actually Honey Buzzers which was formerly Honey Dipps which is placed in a box titled Honey Crunch.

Submitter: Mr Breakfast
Uploaded: 3/13/2008
Additional details
Upload an image for this cereal
Comments About This Cereal
What do you think of Honey Dipps?
There are no comments yet for this cereal. Be the first! Was it good? Was it bad?
Do you have information not included in the article? Let the world know!