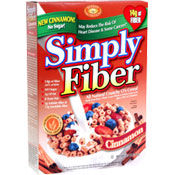 From: Benefit Nutrition
Introduced in 2008


When it was introduced in 2008, Benefit Nutrition described their new cinnamon cereal like this:

"NOW IN A NEW CINNAMON FLAVOR... Crunchy Bran O's with tasty whole wheat and corn with NO SUGAR or SODIUM!

"Once in a rare while a food comes along that can really make a difference in how you feel.

"Simply Fiber is that food!

"With one serving of Simply Fiber to start your day, or any time, you'll have 56% of the recommended daily allowance of fiber."

Company Description: Benefit Nutrition was started in 1996 with the introduction of their first cereal, Protein Plus. The company credits "food technologists and sports nutritionist" with helping to create what they call... Read on and see all cereals from Benefit Nutrition

Upload an image for this cereal
Comments About This Cereal
What do you think of Simply Fiber - Cinnamon?
There are no comments yet for this cereal. Be the first! Was it good? Was it bad?
Do you have information not included in the article? Let the world know!