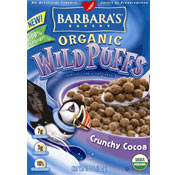 
This cereal appears to be a renamed, reworked version of an earlier cereal from Barbara's Bakery called Organic Wild Puffs - Cocoa (without the word "crunchy").

Crunchy Cocoa Wild Puffs are described on the box as a "crunchy corn & oat cereal." On their website, Barbara's Bakery describes it like this, "Fuel your day with a good breakfast and you'll charge through any challenge. Organic Wild Puffs Crunchy Cocoa Cereal is bursting with crunchy, organic grains and the tempting taste of cocoa. Just what you need to go big!"

In early 2009, the cereal box featured a snowboarding Puffin (bird) in a blue scarf.

Upload an image for this cereal
Comments About This Cereal
What do you think of Organic Wild Puffs - Crunchy Cocoa?
There are no comments yet for this cereal. Be the first! Was it good? Was it bad?
Do you have information not included in the article? Let the world know!