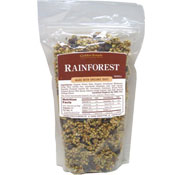 From: Independent / Undefined
Introduced in 1991


Note from Mr. Breakfast:
I've been unable to locate an actual package of Rainforest Granola. The image for this cereal is actually a photo of a label for the granola slapped on a stock photo of bulk granola. If you happen to have a photo of this one, please post a note below. Thanks!

Upload an image for this cereal
Comments About This Cereal
What do you think of Rainforest Granola?
By Vall NAtural Pr

We are looking for organic cereal in bulk, please send your product list to marketing@vallnaturalproducts.com - Joseph Allen