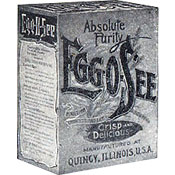 From: Independent / Undefined
Introduced in 1906


From the Egg-O-See Co. of Quincy, Illinois.

As described by a 1906 magazine ad, "There is no food product that contains so many of the elements necessary to health and proper nourishment as the whole wheat grain, properly cooked. Egg-O-See is made from the whole grain of the the very best white wheat grown. It is first thoroughly steam-cooked, with every sanity precaution, and then it is flakes and crisped to a delicious brown, in ovens specially made for this purpose so that every package is exactly the same. That is scientific food making; the Egg-O-See way."

The front of each Egg-O-See box included the words "absolute purity" and "crisp and delicious".

The unusual cereal name may have come from an accented-delivery of the phrase "I'll go see". According to one tale, a salesman asked for corn flakes in a diner and was told by a Scandinavian waitress, "Eg go see". 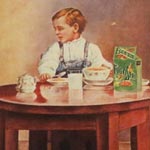 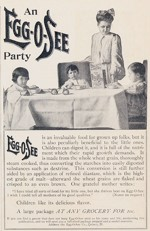 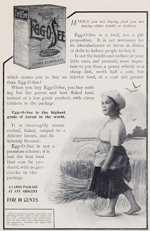 Submitter: Giaco123
Uploaded: 3/27/2008
Additional details
Upload an image for this cereal
Comments About This Cereal
What do you think of Egg-O-See?
By Tim W.

A Mr. Kelsey came to Quincy and proposed building a cereal plant in Quincy sometime prior to 1903. John Cassidy, owner of a stock company in Quincy and all around promoter, lined up initial investors. Kelsey was replaced with John Linihan from Battle Creek who had a better process for making cereal flakes. The company opened about April 1903 and expanded rapidly to about 200 employees within a year or so. In 1905, Cassidy acquired Cero Fruito Breakfast Food company in Battle Creek, MI. This was the plant that had originally been managed by John Linihan.

Cassidy then relocated to Chicago as president of Egg-o-see around 1906. In 1908, Egg-o-see went into receivership as creditors were concerned that Egg-o-see had never been profitable. Liabilities were around $635,000 with payables overdue, and assets about equal to the liabilities. Cassidy was charged with improper use of funds to the amount of about $110,000. Receivership ended favorably in Feb 1909 and the executive office was relocated to Quincy with Linehan in charge.

Egg-o-see changed its name to United Cereal Mills in March, 1910. The company seems to be doing well in 1915. Their main products are Washington Crisps, E-C Corn Flakes and Egg-O-See. The company has some food restrictions in 1918 due to WW1 and a strike by the women workers over wages and hours, but continues on.

I have a painted picture advertisement on metal with a wood frame which is of a little boy eating his breakfast of Egg-o-See and saying 'der ain't goin to be no leavins'. There are two cats and a dog in the picture.