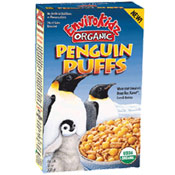 From: Nature's Path
Introduced in 2008

Penguin Puffs is whole grain goodness of organic kamut, quinoa and corn into a fun, crunchy and tasty blend. Not only does it taste great, it is low in fat (2g), low in sodium (135mg), low in sugar (8g), it has (12g) of whole grain per 30g serving and 3g of fiber!

As of 2011, this cereal has disappeared from their website and, presumably, all stores as well.

Upload an image for this cereal
Comments About This Cereal
What do you think of Penguin Puffs?

I ate these once when I came to America the first time. Since then I desperately tried to find them in stores. Unfortunately without any success. :( I hope that one fine day they'll be back in stores.

This is the BEST cereal I've ever had. It tastes so much like real penguins! Just kidding. But it does taste great.

This is the worst cereal I've ever had. The people who make it should feel bad for wrecking my breakfast.