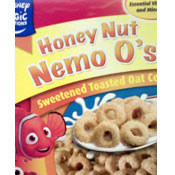 
This product was described on the box as a "sweetened toasted oat cereal." It was similar to General Mills' Honey Nut Cheerios in both taste and appearance.

The "Nemo" in Honey Nut Nemo O's refers to a character from the 2003 Disney Pixar animated film Finding Nemo.

Company Description: The Disney Magic Selections-branded line of products was introduced in 2007. Approximately 100 new products suddenly appeared in grocery stores after Kroger Co. and Disney Consumer Products teamed up to create the new product line... Read on and see all cereals from Disney Magic
This cereal belongs to the following Mr Breakfast Cereal Families:
Upload an image for this cereal
Comments About This Cereal
What do you think of Honey Nut Nemo O's?
By Mann

Tasted EXACTLY like Honey Nut Cheerios, but that was point. Haven't seen it for years now.