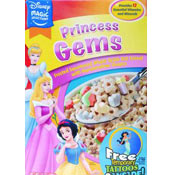 From: Disney Magic
Introduced in 2007


This cereal was described on the box as a "frosted sweetened whole grain oat cereal with marshmallow shapes." The front of the box featured three Disney characters: Snow White, Aurora and Cinderella.

Company Description: The Disney Magic Selections-branded line of products was introduced in 2007. Approximately 100 new products suddenly appeared in grocery stores after Kroger Co. and Disney Consumer Products teamed up to create the new product line... Read on and see all cereals from Disney Magic
This cereal belongs to the following Mr Breakfast Cereal Families:
Additional Images

Submitter: Mr Breakfast
Uploaded: 3/18/2008
Additional details
Upload an image for this cereal
Comments About This Cereal
What do you think of Princess Gems?
There are no comments yet for this cereal. Be the first! Was it good? Was it bad?
Do you have information not included in the article? Let the world know!