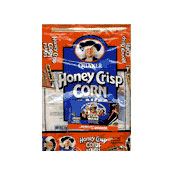 
This was a bargain-priced bagged cereal from Quaker that was similar in flavor to Kellogg's Frosted Flakes.

Upload an image for this cereal
Comments About This Cereal
What do you think of Honey Crisp Corn Flakes?
By FYI

Quaker sold their bagged cereal line to Malt-O-Meal in 2002.

I'm sure they were the cornflakes I had as a child. Why did they go out of the market? - Mrs R Johnson