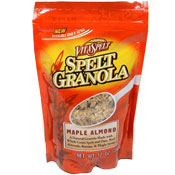 
VitaSpelt is a brand of Purity Foods.

"Vita-Spelt is Purity's premier line of products made from a grain called Spelt. Spelt has been grown for thousands of years in Europe. In this country, Spelt used to be grown by the hundreds of thousands of acres. Eventually, increased mechanization made it an impractical crop, and gradually it was replaced by its less desirable, but more economically produced cousin, wheat. Now Spelt is making a big comeback in the United States. It has a rich, nutty flavor and a smoother texture, containing a "balanced" protein made up of all eight of the essential amino acids your body requires. Finally, Vita-Spelt products are more easily digested than wheat and most other grains, and consequently place less stress on the body. In fact, the Vita-Spelt whole grain and white Spelt pasta line includes spaghetti, elbows, angel hair, rotini, and lasagne, among others."

The company is located in Okemos, MI, near Michigan State University in neighboring East Lansing, MI.

Upload an image for this cereal

Comments About This Cereal
What do you think of VitaSpelt Spelt Granolas?
There are no comments yet for this cereal. Be the first! Was it good? Was it bad?
Do you have information not included in the article? Let the world know!