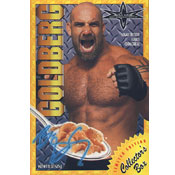 
This very limited edition cereal featured Goldberg (full name: William Scott Goldberg), a famous WWE and WCW wrestler in the late 90s. The box had Goldberg shirtless making a fist and a menacing face. It also had his signature and the words "collector's box" toward the bottom of the box front.

This cereal never received full nationwide distribution and was more likely to be found in sports memorabilia stores than grocery stores.

Upload an image for this cereal
Comments About This Cereal
What do you think of Goldberg Sugar Frosted Flakes?
There are no comments yet for this cereal. Be the first! Was it good? Was it bad?
Do you have information not included in the article? Let the world know!