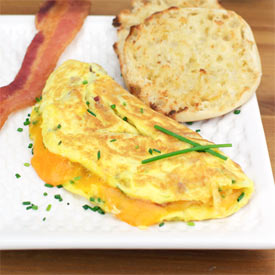 (2 servings)    Printable Version
When I started making this omelette, I was worried that 4 slices of bacon might be too much. One can have worse worries than having too much bacon at breakfast, so I bravely carried on. As it turned out, it was the perfect amount. Any less and the bacon would have gotten lost among the other flavors. The sour cream makes this omelette rather tender so use care when flipping. I filled mine with some additional Cheddar cheese and garnished it with some extra chives. I enjoyed this omelette very much and would definitely make it again. (Recipe submitted in 2003. It was tested and photographed in September 2013.) 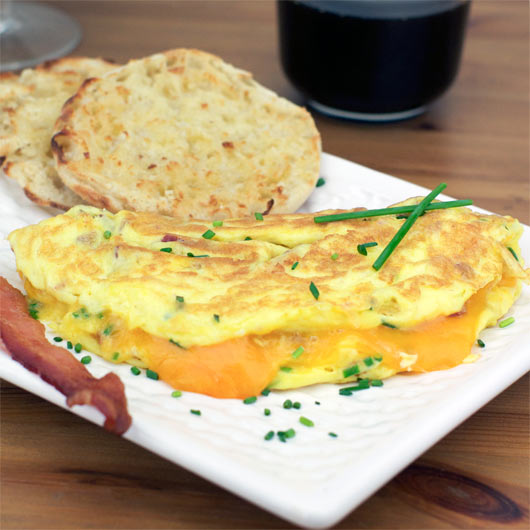 How To Make A Bacon, Cheddar & Chives Omelette

Mix eggs slightly. Combine with bacon, cheese, sour cream and chives. Pour the mixture into a frying pan (coated with cooking spray) over medium-high heat. As the egg begins to set, lift the edges with a spatula so uncooked egg flows under and gets cooked.

When egg is almost fully cooked, fold the omelet and turn off heat. Let the omelet set 1 more minute so the inside finished cooking. 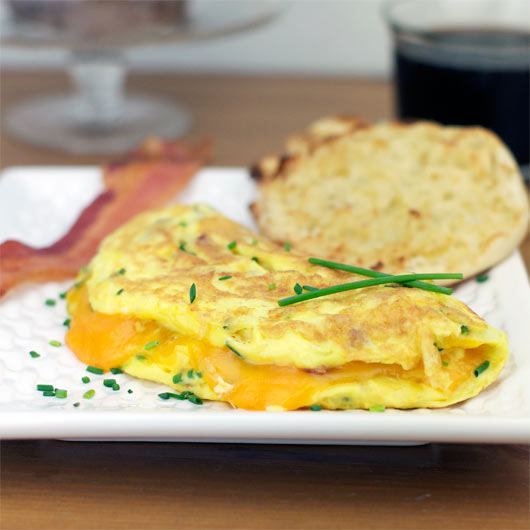 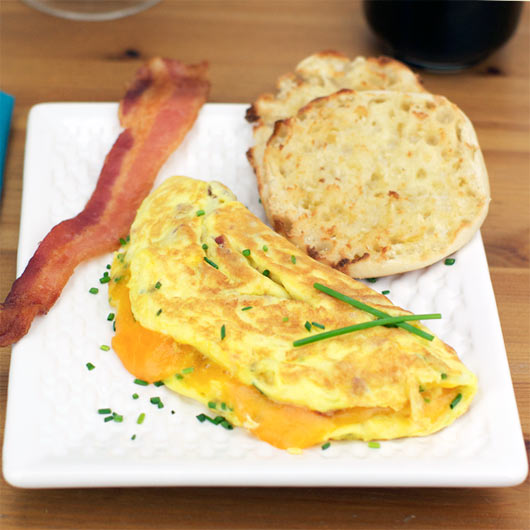 For best results, try not to over cook this one. The eggs should be tender and just barely cooked through like a French omelette.

Mr Breakfast would like to thank dalencaroline for this recipe.


Comments About This Recipe
What do you think of Bacon, Cheddar & Chives Omelette?
Overall Average Rating = 5 (out of 5)
Based on 11 votes.

From Omeletterios
It look very delicious. I want to eat it right now but tomorrow early morning I can!

From AuntBanger
This omelette was the best!

From baconman
Best thing I've ever eaten! Make this if you haven't already.

From H. Pepper
This is the most amazing omelette ever.

From Jetty
Wow. That was so AWESOME! Great recipe.

I live in China. They have no idea what sour cream is here. Dang it.

From Omelettebanger
Imagine the best sex you've ever had x 10. That's how good this omelette was.

From allen p.
It's really awesome.

From Think I Crazy
It was just so easy to make and full of flavour... awsome!

From Joe
This omelette was excellent!!! I really like the sour cream in it. A++

From Omelet Eater
Loved it. It was so easy to make and just so full of flavor!