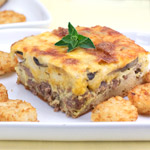 (8 servings)    Printable Version
This casserole was easy to make, really tasty and very filling. I followed the directions as submitted, except that I used Cream of Mushroom soup instead of Cream of Onion. I searched two grocery stores for Cream of Onion soup and came up empty. The thing I found most interesting about this recipe was how the crescent roll crust crept up the sides of the pan while cooking - creating a complete crust instead of just a bottom layer. Final Verdict: Texas-sized satisfaction for a Texas-sized appetite. (This recipe was submitted in 2003. It was tested and photographed in April 2014.) 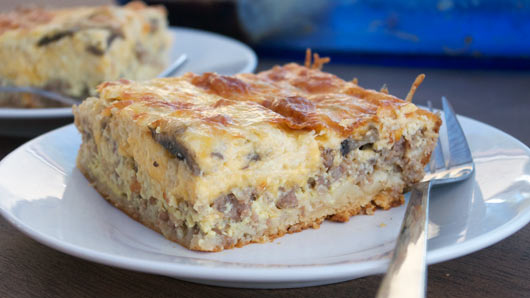 How To Make A Texas Breakfast Casserole

Line a 13 x 9 inch Pyrex dish with the rolls, sealing perforations. Cover with sausage (drained of excess grease), mushrooms and half of the cheese. Mix eggs with the soup and pour over the casserole.

Note: For variation, you can use cooked and crumbled bacon or bite-sized pieces of ham instead of sausage. 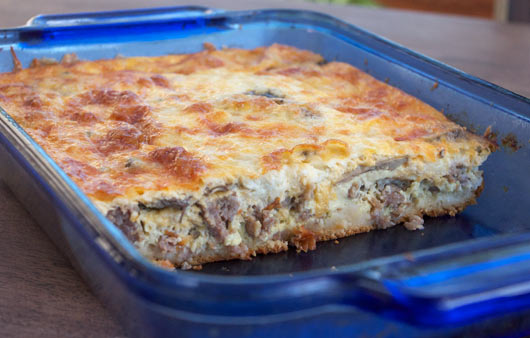 For the crescent rolls, you unroll each roll and line the bottom of the pan with strips of dough. I used an 8 ounce tube which lined the bottom and also ran up the sides about 3/4 inch.

I found the 4 sliced large button mushrooms made one layer of fresh mushrooms. 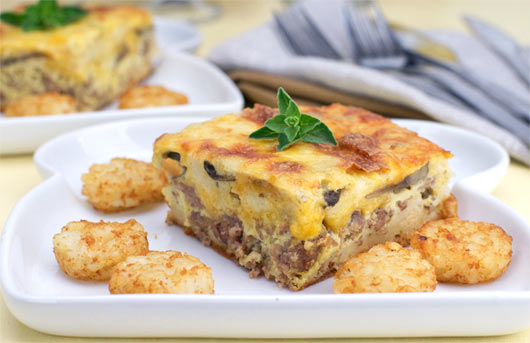 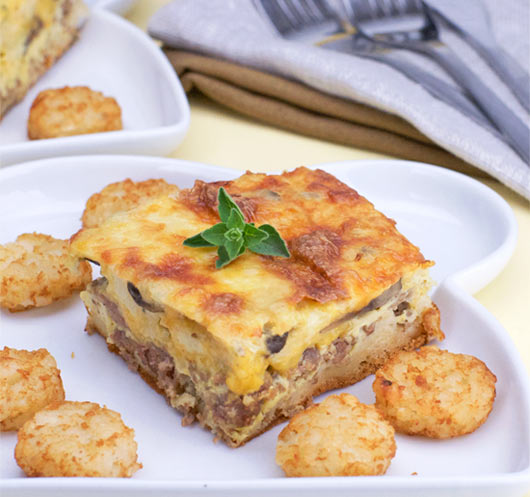 Yee ha! Howdy pardner, I hope you've got a big case of the hungries. This easy-to-make casserole is meant to satisfy big appetites.

Mr Breakfast would like to thank holli for this recipe.


Comments About This Recipe
What do you think of Texas Breakfast Casserole?
Overall Average Rating = 5 (out of 5)
Based on 6 votes.

From Cutie
I make this on Christmas Eve every year and put it in the oven on Christmas morning. Super delicious!

I wonder if the casserole is dry since there is no addition of milk as in other similar casseroles? Also, can you use fresh crescent rolls instead of the canned type?

From KayBradley
We make this all the time. It's a big family favorite. But we use both sausage and crumbled up bacon. And like the other person said, cream of mushroom soup works really good.

From Choppy
I've made this before with cream of mushroom soup and it's a winner. Really easy to make too.

From Sue
I took this to an early college football game as a tailgate dish, brought it in to work as a holiday breakfast treat and it was perfect for New Year's breakfast since all required in the morning is to pop it in the oven. It was a hit every time!

From romer420 (Team Breakfast Member)
It was FANTASTIC! I did however alter it by using buffalo meat instead of sausage. And instead of cream of onion soup, I used Cream of mushroom. I also added sundried tomatoes to the mix. Then served it with mimosa (orange juice and champaign mixed together). Everyone LOVED IT:)

From romer424 (Team Breakfast Member)
My family loved it!!! This is one for the family recipe book:)