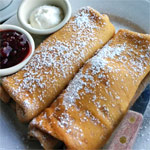 (15 servings)    Printable Version
For crepes: In a medium bowl combine egg, milk, and flour. Beat with rotary beater until well mixed. Spray an unheated 6-inch skillet or crepe pan with nonstick coating. Preheat skillet over medium heat. Remove from heat and pour in about 2 tablespoons batter. Lift and tilt skillet to spread batter. Return skillet to heat; cook 30 to 60 seconds or until browned on 1 side only.

Remove from pan. Repeat with remaining batter to make 15 crepes. Lightly brush skillet with shortening between cooking, as needed.

Spray a shallow baking pan with nonstick coating. Set aside. For filling, in a bowl combine ricotta cheese, the 2 tablespoons orange marmalade, the sugar, and cinnamon. Spoon about 2 tablespoons filling onto the unbrowned side of a crepe; spread out slightly.

To fold: 1) Fold in half. Fold in half again, forming a wedge; or 2) Fold like a burrito by folding in the sides and then rolling forward over the filling like a cigar.

Bake in a 350 degree F oven for 15 to 20 minutes or until heated through. To serve, spoon 2 teaspoons of sour cream and 1 teaspoon of marmalade onto each blintz. Sprinkle with powdered sugar and berries.

If making many blintzes at once, arrange them (once filled and folded) on a parchment-lined cookie sheet and bake them.

If preparing only a couple blintzes, you can cook them in a frying pan over medium-low heat with a little butter (flipping once) until browned and filling is warm.

Plan a brunch around these ricotta-filled crepes. You can make the crepes up to two days in advance.


Comments About This Recipe
What do you think of Breakfast Blintzes?
Overall Average Rating = 4 (out of 5)
Based on 2 votes.

From evo93
I omitted the marmalade and added some nutmeg to the filling, served with fresh berries and just a dollop of cream. Excellent.

From Caffeine
I skipped the marmalade, use chopped fresh fruit inside, and poured some hot maple syrup over the blintzes. Very nice.

See All 56 Recipes For Crepes 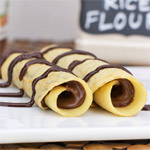 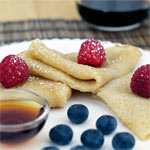 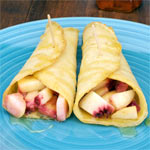 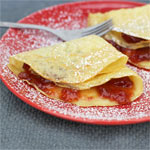