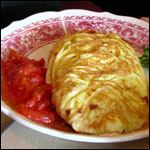 In ovenproof 10-inch skillet over medium-low heat, in hot butter, cook egg mixture three minutes, or until puffy and golden on under side when lifted with a spatula.

Then bake 10 minutes or until golden and top springs back when tapped with finger. Run a spatula around sides to loosen omelet. Make a slit part way across center of omelette; tip skillet and with pancake turner, fold omelette in half; slide onto heated platter.

This recipe is more about technique than ingredients. While cream of tartar helps make it fluffy, it's the beating of the eggs and a watchful eye that really makes a flat, ordinary omelette into a big, puffy, amazing omelette.

Mr Breakfast would like to thank smadere for this recipe.


Comments About This Recipe
What do you think of Puffy Omelette?
Overall Average Rating = 5 (out of 5)
Based on 8 votes.

From Cole Z.
Worked for us. Loved it.

From M. Fizz
It is puffier, fluffier and prettier but the taste is the same as a quicker omelette. I'll save this one for when I have special guests. But the added time and dirty dishes is a bit much for everyday omelettes.

From Sara P.
Definitely puffy and bigger than when I just use the stove top.

From kazzo
Mmm... masterpiece! Turned out great. Will make again for sure!

From fozz
Delicious and definitely puffy.

From sharan
It turned out really pretty like the picture and tasted good, but I don't think the extra time was really worth it. A plain fry pan omelette is just as good, just not as puffy. Good recipe though.

From flex
This omelette was fantastic. I don't think I will ever stop eating it!!!!

From Rita
I think your Omelette was /is/ will always be oh sooooooo good!!!!!!