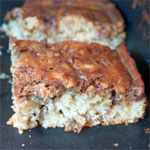 (8 servings)    Printable Version
This coffee cake is meant to bring to mind the flavor and texture of an apple fritter donut thanks to an apple-loaded, vanilla cake base and a sweet, maple-tinged icing. Those who tried it said it did somewhat reminded them of the donut, but more than anything it was just a tasty, quality apple coffee cake. I totally agree with that assessment. It had a lot of apple and cinnamon flavor and was not overly sweet. (This recipe was tested and photographed in January 2015.) 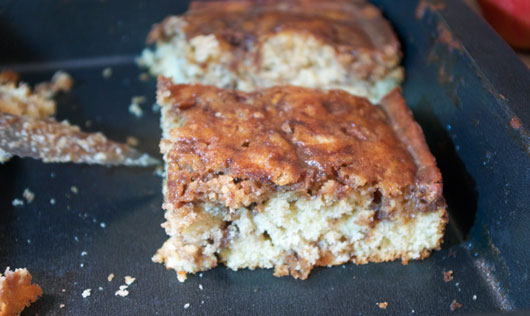 How To Make An Apple Fritter Coffee Cake

Preheat oven to 350 degrees. Prepare an 8 or 9-inch square baking pan by coating generously with butter or cooking spray.

In a large bowl, mix together the flour and baking powder.

In a separate medium bowl, cream together the butter and white sugar. Once smooth, beat in the eggs one at a time. Mix in the vanilla.

Add the butter mixture to the flour mixture and stir until just combined. Add the milk and whisk until smooth.

Take the empty medium bowl and combine the brown sugar and cinnamon. Add the apple pieces and toss to coat.

Pour half of the batter into the prepared pan. Sprinkle half of the apple and brown sugar mixture on top. Gently pat apple mixture into batter. With the tip of butter knife, swirl the two layer into each other.

Bake at 350 degrees for 45 to 50 minutes or until a toothpick inserted into the center comes out clean.

Remove coffee cake from oven and make the glaze by combining powdered sugar, milk and flavor extract. Stir with a fork or small whisk until fluid and well combined.

Drizzle over coffee cake when it is cool enough to touch but still somewhat warm. 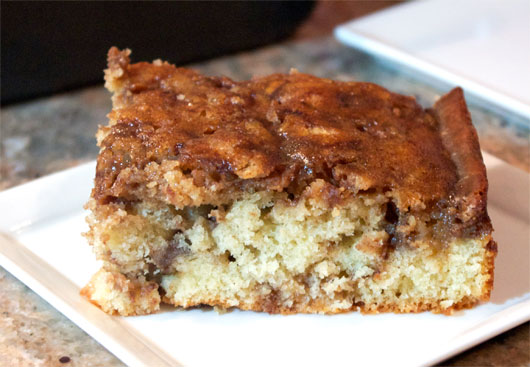 The taste of a delightful apple fritter donut in the form of a coffee cake that you can share with friends and family.


Comments About This Recipe
What do you think of Apple Fritter Coffee Cake?
Overall Average Rating = 4 (out of 5)
Based on 1 vote.

From O. Knox
Was good. Not too hard to make. Not as good as an apple fritter donut, but totally satisfied our sweet craving.

Wonderful cake! I topped it with caramel instead of the glaze in the recipe.