Sift the flour, baking powder, salt, nutmeg and cinnamon together into a medium bowl.

In a mixer fitted with a paddle attachment, add the shortening and the sugar. Mix on slow until the mixture resembles coarse sand. Add the egg and mix on slow until well combined and uniform in color.

Transfer to a bowl that's been sprayed with cooking spray, cover and refrigerate for at least 1 hour and up to 24 hours.

In a heavy pot or fryer, heat 3 inches of canola oil to 360 degrees.

Gather the dough remnants and ball them up. Flatten again to 1/2-inch and cut out additional donuts.

Carefully, slide 2 or 3 donuts into the hot oil. As soon as the donuts float, flip them over using two chopsticks or dull knives. Cook until the underside is lightly browned - about 40 seconds. Flip and cook the other side to golden brown - about 30 seconds.

Transfer completed donuts to stacked paper towel. Be sure the oil is at 360 degrees again before frying another batch. Allow donuts to cool before icing. 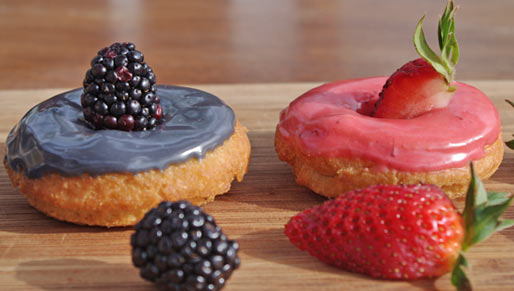 Place the powdered sugar, jam and water in bowl large enough to dip the donuts into. Stir until it forms a frosting consistency. Add additional water just a drop at a time until the consistency is like honey. If desired, add a drop of food coloring to accentuate the kind of jam you're using. Dip the tops of each donut into the icing. Let them set for 15 minutes for the icing to firm up.

For the final touch, place a berry in the hole of each donut. 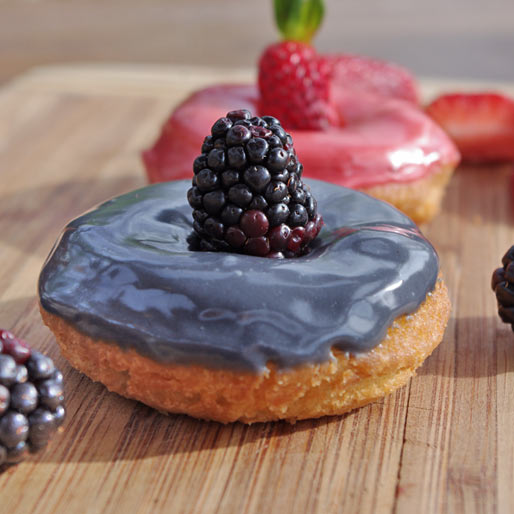 These homemade cake donuts can be any berry flavor that you like depending on the jam you decide to use for the icing.


Comments About This Recipe
What do you think of Berry Delicious Cake Donuts?
Overall Average Rating = 5 (out of 5)
Based on 4 votes.

From ait5197
I'm having trouble with my doughnuts being too dense. Is there any way to remedy this?

From P. Puff
These were amazing!

Can't wait to try this recipe. My mixer does not have a "paddle"... but I do have a dough "hook"... any suggestions?

From Erin Stewart
First time making dounts... turned out GREAT! Kitchen is a mess, but can't argue with the results. Glaze came out very pretty with raspberry jam. Thanks for the recipe!

From schweet (Team Breakfast Member)
Thanks Mr B! I was hoping you'd post more donut recipes. My wife didn't believe me that mashed potatoes were used in donuts some times. It's process making homemade donuts, but it's so worth it!