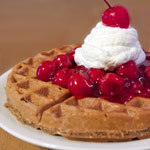 (5 servings)    Printable Version
I made these waffles for a mommy's brunch and they went over super well with all the ladies in attendance. The waffles came out very fluffy. They had just enough chocolate to really compliment the cherries. If you're a huge chocolate lover, you should consider adding the optional extra chocolate chips. A little almond extract in the whipped cream also emphasized the cherry flavor. I would absolutely make these again. They were great for brunch. They'd also make a terrific dessert with the added chocolate chips. (This recipe was developed, tested and photographed in August 2014.) 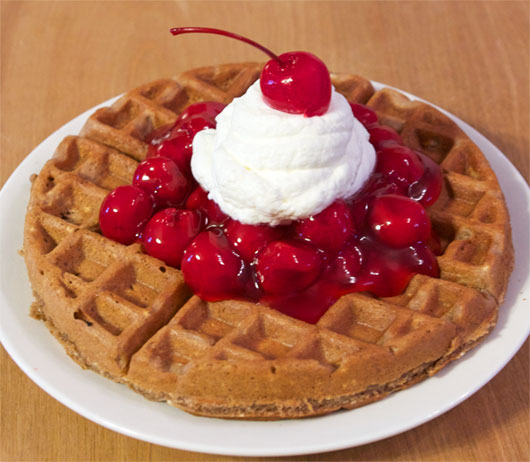 How To Make Black Forrest Waffles

In a large mixing bowl, sift the flour with the baking powder. Stir in the sugar and salt.

In a separate medium mixing bowl, beat the egg yolks with the milk and vanilla.

In a microwave safe bowl, melt the butter (about 30 seconds). Stir in the chocolate chips. Keep stirring until the chocolate is melted and well combined.

Add the milk mixture to the flour mixture and stir until just combined. Stir in the chocolate mixture.

Tip: For extra chocolatey waffles, sprinkle a small handful of chocolate chips over each waffle just before closing the lid of the waffle maker.

For Topping: Beat the heavy cream with an electric beater until thick, creamy and almost frosting-like in consistency (about 4 minutes). Beat the powdered sugar and almond extract into the whipped cream. Top each waffle with a couple heaping Tablespoons of pie filling (or jam) and a big dollop of whipped cream. 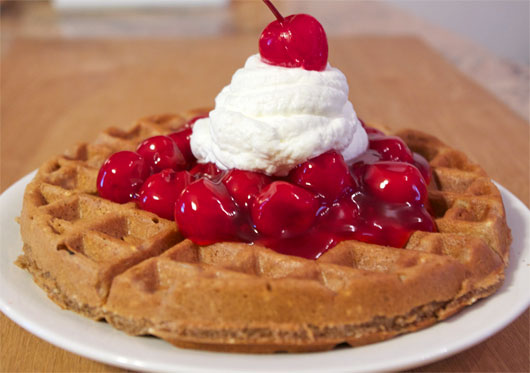 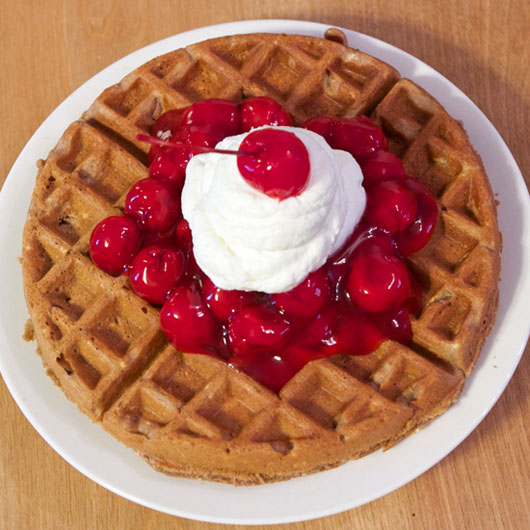 
Comments About This Recipe
What do you think of Black Forrest Waffles?
There are no comments yet for this recipe. Be the first! Was it good? Was it bad? Did you make it better somehow? Let the world know!