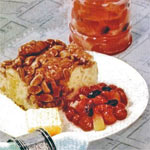 Bake in hot oven (400 degrees) for 25 minutes or until cake tests done. Cool slightly in pan on cake rack; cut into squares.

Other strained fruits for babies may be substituted for peaches. 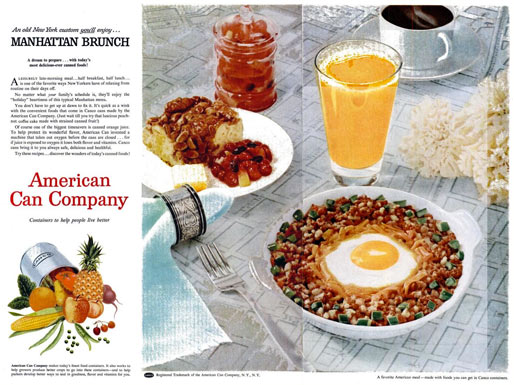 This retro recipe is from a 1954 advertisement from the American Can Company titled, Manhattan Brunch. According to the ad, "You don't have to get up at dawn to make (brunch). It's quick as a wink with the convenient foods that come in Canco cans made by the American Can Company. Just wait till you try that luscious peach-nut coffee cake made with strained canned fruit!"

From this same classic ad, also see a recipe for Corned Beef Hash a la Waldorf.

* You can replace the baby food with a fresh peach that's been pitted, peeled and pureed.

This vintage coffee cake recipe has an unusual ingredient: peach baby food. That might sound weird but, in reality, it's just mashed fruit. From a 1954 advertisement for the American Can Company.


Comments About This Recipe
What do you think of Peach-Nut Coffee Cake?
Overall Average Rating = 4 (out of 5)
Based on 1 vote.