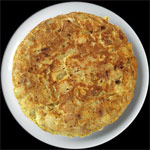 (4 servings)    Printable Version
Heat olive oil in a large skillet over medium-high heat until very hot but not smoking. Add the potatoes and season them with salt. Cook - stirring occasionally - until the edges of the potatoes are just golden, but not brown. Transfer to a bowl. Set aside.

Keep the skillet over the burner. Reduce heat to medium-low.

In a large bowl, beat the eggs with salt and pepper to taste. Stir the cooked potatoes into the eggs and pour this mixture into the skillet.

Cook until the bottom and edges have set but the middle of the tortilla is still runny. Carefully flip the tortilla over by inverting it onto a plate, then sliding it back into the pan bottom side up. Cook until completely set. Slide onto a plate and cut into wedges to serve. 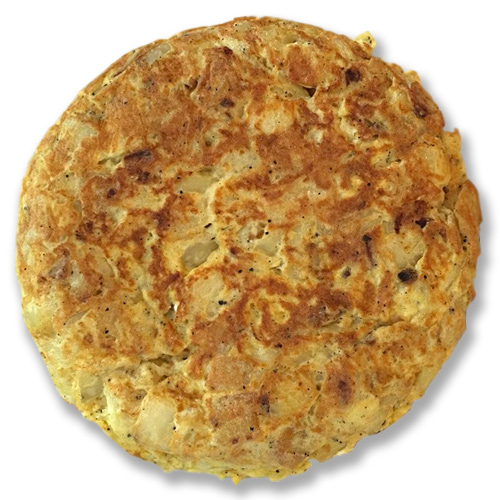 Variation:
If desired, you could add onion. Saute 1/2 of a large onion (chopped) in a couple Tablespoons of olive oil and add that when the potatoes and eggs are mixed.

Also known as Tortilla Espanola. You can Americanize this Spanish classic by adding a handful of Cheddar cheese to the egg and potato mixture... it's like having a Potatoes au Gratin omelet.

Mr Breakfast would like to thank pcdrawme for this recipe.


Comments About This Recipe
What do you think of Tortilla de Patatas?
There are no comments yet for this recipe. Be the first! Was it good? Was it bad? Did you make it better somehow? Let the world know!