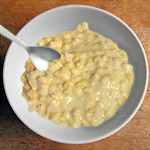 (6 servings)    Printable Version
In a large sauce pan over high heat, bring the water and the hominy to a rolling boil. Reduce heat to a simmer and cover - allowing a small amount of venting. Simmer for 1 hour - stirring frequently - until hominy is tender. Add additional water while cooking if necessary to reach desired constancy.

Add the evaporated milk, condensed milk, cream of coconut, vanilla, cinnamon and nutmeg. Increase heat and bring to a boil. Reduce heat to a simmer and cook until thickened - about 2 minutes.

Transfer to 6 serving bowls and sprinkle with additional nutmeg and cinnamon. Garnish with dried coconut if desired.

Note: For thicker porridge, strain away 1/2 cup of water from the hominy before adding the evaporated milk and other ingredients.

This is a Jamaican dish... a Caribbean getaway from plain old oatmeal.

Mr Breakfast would like to thank gifford for this recipe.


Comments About This Recipe
What do you think of Hominy Porridge?
Overall Average Rating = 5 (out of 5)
Based on 5 votes.

I saw a lot of recipes with flour and cornstarch and I'm not too keen in using those, so I'm gonna try this!

Thanks for the recipe... I'm going to try it today. To @Leroy: My Grandmother (from Oracabessa, Jamaica) always put condensed milk (looked it up and condense milk dates back to 1820). In fact she didn't put any other milks. To thicken, she started by stirring a little flour and water adding it to the pot to a boil then added everything else. I'm 32 and all my life it had condensed milk. She also added a little cinnamon and allspice. She is the reason I was searching for a recipe so I can make it for old time's sake because it was so good!

From Jay
This is absolutely delicious indeed. It reminds me of being a child in Jamaica. Back then, we used Betty or Nestles sweetened condensed milk as well as Gloria or Carnation evaporated milk and that was many many years ago. The condensed milk gives this cereal a rich taste and you don't have to add a lot of milk.

From ThomasLiz
Liked it a lot, but like the other guy said, it's very sweet. Next time, I would use 1/2 cup of condensed milk (I liked how it made it creamy) and 1/2 cup regular milk.

Hominy is a Jamaican dish. We use condensed milk in all our porridge. Jamaicans are exceptional people. We are unique in our cooking. Hominy without condensed milk is like curry goat without curry...

From Winnie
I ate the entire pot by myself and I'd do it again.

From chelle
Very tasty!!! I love it.

From Georgie
This is an EXCELLENT hot cereal!!!!! Awesome!!!!