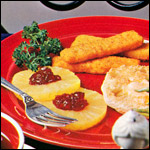 Set oven control at broil and/or 550 degrees. Broil fish sticks and pineapple slices 5 inches from heat about 5 minutes or until fish sticks are golden. Serve with English muffins. 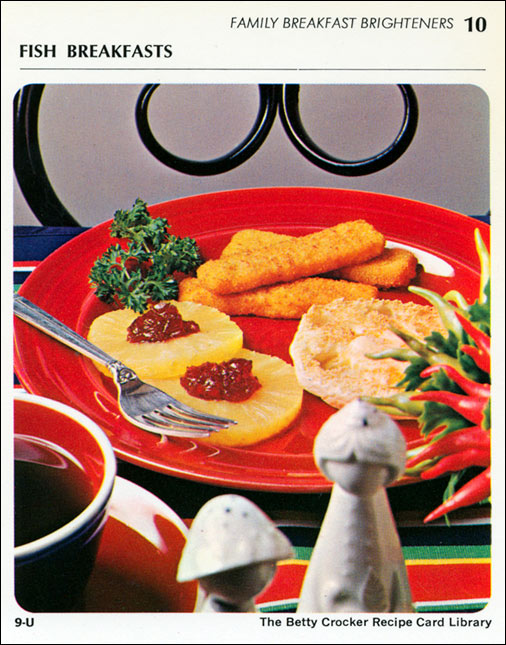 This classic recipe is from a Betty Crocker recipe card.
©Copyright 1971 by General Mills, Inc.


Comments About This Recipe
What do you think of Fish Stick Breakfast Broil?
Overall Average Rating = 5 (out of 5)
Based on 1 vote.

From Steven G.
I can't wait to make this. Only problem is, I wouldn't know where to buy the cranberry and orange relish, but, being the resourceful type, I will simply mix cranberry sauce and marmalade 50-50 if that's alright. And I still need to the see the point of cooking pineapple, so I will save a bit of electricity on that one. It goes without saying that I will eat the fishy muffins and the fruity ones separately and even in chronological sequence, separated by my morning carrot and ginger juice. But at his stage, I will not put the fish fingers inside muffins, but on top of toasted potato farls, some with curly parsley, some with a dollop of creamed horseradish. All topped with hefty amounts of Sumatran coffee as usual!

From the looks of things the only thing that got eaten here was the diner, having been devoured by the creeping red and green monster on the left. Am I mistaken, or are the salt and peppers supposed to represent Japanese fleeing from the afore mentioned monster. Perhaps this is what they eat for breakfast in Tokyo.

Good thing it's just my opinion. It looks and should stay in the 70's.