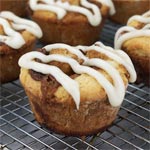 (12 servings)    Printable Version
These are great tasting and kind of fun to make. However, I can only recommend making these if you plan to eat them within 6 hours after baking. This is a quick bread recipe that uses baking powder (not yeast) to help the rolls rise. All quick bread batters should be treated gently. This recipe requires some over-mixing in order to shape the rolls. That overworking results in rolls that dry out faster than normal. For 6 hours, these are fantastic. After that, not so much. I topped my rolls with a really nice Cream Cheese Icing (recipe below). If you'd like to make yeast-raised rolls that stay moist longer, see our recipe for Homemade Cinnamon Rolls. With all that said, I loved the flavor of these cinnamon rolls and they expanded beautifully in the muffin cups. Add the icing and these are wonderful to wake up to. (This recipe was submitted in 2010. It was tested and photographed in January 2014.) 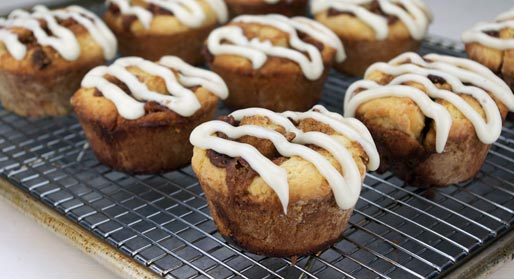 Preheat oven to 425 degrees. Prepare a 12-cup muffin tin by greasing the cups generously with softened butter and dusting them with flour.

Sift the flour and baking powder into a large mixing bowl. Stir in the sugar and salt. Add the shortening and mix with a fork until the shorting is incorporated and the mixture looks like a fine crumble.

In a separate bowl, whisk together the buttermilk, beaten egg and vanilla.

Add the wet mixture to the flour mixture and mix with a wooden paddle or sturdy spatula just until the dry ingredients are moistened and the batter clumps together in a ball.

Turn the dough out onto a a floured, flat surface. Sprinkle flour over the dough and kneed by hand 5 or 6 times to form a 6-inch log. With a rolling pin, roll the dough into a 7-inch by 16-inch rectangle.

Brush the top of the dough with melted butter. Mix the sugar, cinnamon and optional chopped nuts together in a cup and sprinkle mixture evenly over the dough.

Roll the dough - starting at one of the wide ends - into a 16-inch log.

Slice the log into 1 and 1/2 inch pieces and transfer each pieces into a prepared muffin cup.

Bake for 15 to 20 minutes until lightly browned. 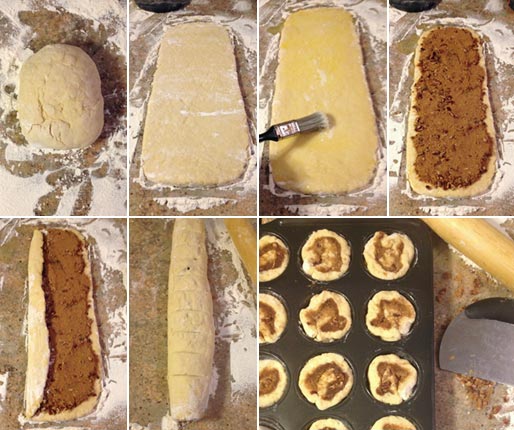 How To Make Cream Cheese Icing

Place all ingredients in a medium mixing bowl and stir with a fork or small whisk until it forms a smooth, creamy frosting that drizzles off the fork or whisk in a slow stream. Drizzle icing over cooled cinnamon rolls. 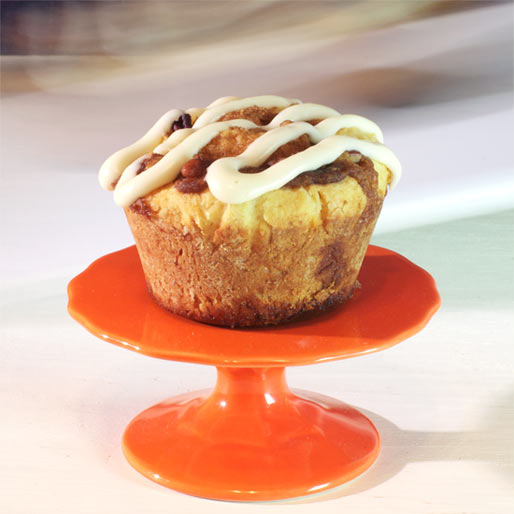 A good old-fashioned cinnamon roll recipe with a delightful twist - the rolls are prepared as individual-serving muffins.

Mr Breakfast would like to thank lmj13 for this recipe.


Comments About This Recipe
What do you think of Muffin Cup Cinnamon Rolls?
Overall Average Rating = 4 (out of 5)
Based on 2 votes.

From pablo
It tasted pretty good at first but after it cooled down, it became stale. Think it's missing some icing...

Just made them in the oven right now!!

I am whipping up a batch now. But I think in the recipe instructions you forgot to add the 2/3 cup milk after cutting in the shortening. I also am making them on a regular baking sheet since I haven't any muffin tins.

From CornFlake (Team Breakfast Member)
I love the idea of making these in the muffin cups, although they could also be made just by placing them on a baking sheet. Any good icing recommendations?