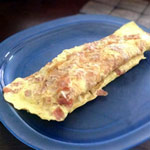 (1 serving)    Printable Version
Heat the oil in a large frying pan over medium heat. Add the onion and saute until softened and lightly browned - about 6 minutes stirring occasionally.

Meanwhile in a medium bowl, beat the eggs, milk and salt together.

Transfer the onions to plate.

Reusing the same frying pan, increase the heat to medium-high and carefully run a wadded paper towel around the inside to clean.

Add the egg mixture. As the egg starts to set, lift the edges of the omelet with a spatula and gently tilt the pan so uncooked egg runs beneath.

Turn off the heat and allow the omelet to cook an additional minute or two - flipping the entire omelet at least once. This will warm the filling ingredients and help make sure the egg on the inside gets completely set.

Slide the omelet onto a plate and serve.

If desired, you can garnish the top of the omelet with a little freshly grated Parmesan cheese.

Tips: You can easily turn this into a classic ham and cheese omelet by sprinkling 1/4 cup shredded Cheddar cheese in with the ham and onion before you fold the omelet over (skip the Parmesan and sprinkle just a little Cheddar on top of the omelet too). To get a Denver-style omelet, cut the amount of onion in half and saute it with 1/4 of a green pepper.

Mr Breakfast would like to thank starr for this recipe.


Comments About This Recipe
What do you think of Ham & Onion Omelet?
Overall Average Rating = 4 (out of 5)
Based on 2 votes.

From Lemmie
Reduced the onion- it was great!

From poolhall
Too much onion. It should just be 1/4 of an onion and it's much better.

I think the ingredients should be 4 eggs instead of 3 eggs.