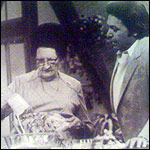 (8 servings)    Printable Version
Preheat oven to 500 degrees. Mix all ingredients together. Grease a skillet (with ovenproof handle) with some oil, coat lightly with flour. Pour batter into skillet, bake for about 10 minutes, or until golden brown.

From The Hour Magazine Cookbook: "His is a name that's been number one on the Top 10 country charts since 1974 - and he went from rhythm to recipes in Mickey Gilley's Texas Cookbook. He came on the show with his mom Irene, and brought a corn bread recipe that'll lasso in all of you unbelievers.


Comments About This Recipe
What do you think of Texas Corn Bread?
Overall Average Rating = 5 (out of 5)
Based on 2 votes.

From Big Winner
I have used this recipe for at least 20 years and it has never failed me. Won't use any other. Bless Mrs. Gilley for a wonderful recipe and her son who is a great entertainer.

From joni and nick
Simple recipe. It was great. I don't know either one of those guys, but you gotta love their corn bread... especially with butter! Had it with chili (sorry no breakfast this time) LOL!