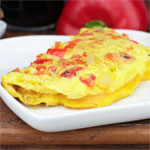 (2 servings)    Printable Version
Roasted red peppers remind me of camping. When you roast them as indicated here (just over the flame of your gas stove), a campfire smell wafts through the kitchen. That flavor stays with the pepper even if you scrape off the charred skin. Scrapping the charred bits is optional. I usually just wipe the pepper down with a paper towel when it's cool enough to handle. I think a little burnt pepper in my omelet looks kind of cool. I stuck with the recipe as submitted and used grated Cheddar cheese, but I could see it also being great with Pepper Jack or Swiss cheese. Another thing that would be good would be to saute 1/2 of chopped jalapeno in with the bell pepper and onion, so the smokiness of the red pepper has some heat to play with. (This recipe was submitted in 2008. It was tested and photographed in December 2013.) 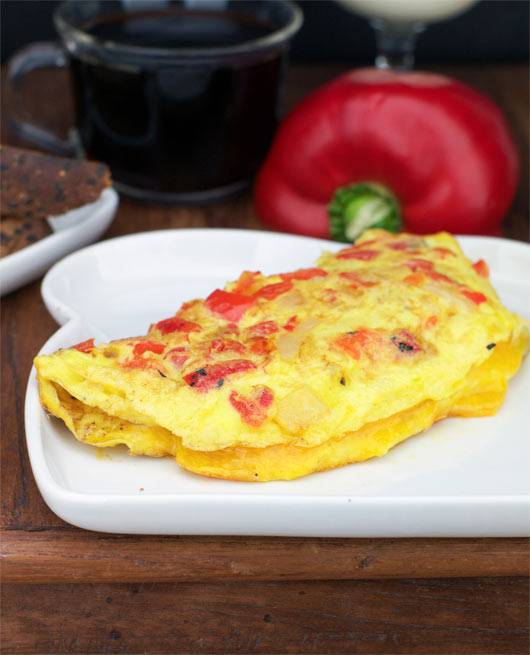 How To Make A Roasted Red Pepper Omelet

First... fire roast the pepper with the easy at-home method. Place the pepper directly over flame (set to medium) of your stove top. Occasionally move the pepper so most of the outer skin gets blackened and charred. Remove from heat. Let cool one minute. Then chop pepper into small pieces.

In a medium mixing bowl, beat the eggs with the milk until frothy. Set aside.

In a large fry pan over medium heat, melt the butter and add the chopped pepper and onion. Saute the vegetables for about 4 minutes - stirring often -- until the onions star to become soft and translucent.

Pour the egg mixture over the vegetables in the fry pan. As the egg starts to set, lift the edges of the omelet with a spatula so uncooked egg flows beneath.

When egg almost completely set, sprinkle cheese over one side of the omelet. Fold the the omelet so the cheese is covered. Cover the pan and turn heat to low. Cook for one more minute.

Transfer omelet to a serving plate and season to taste. 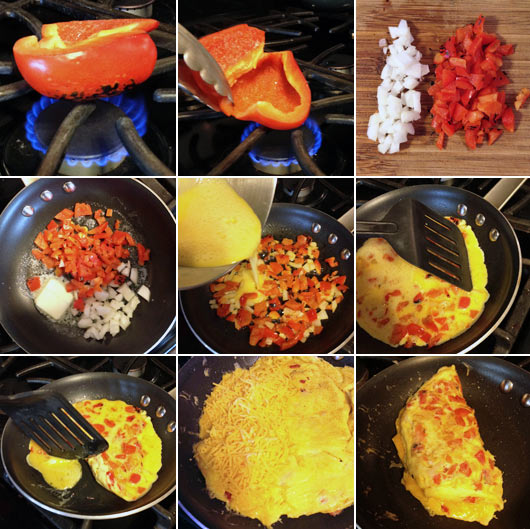 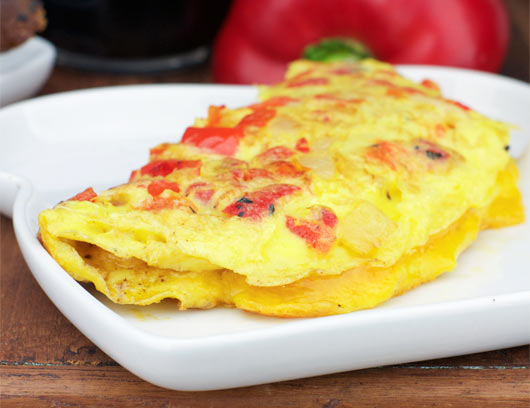 This makes one very large man-sized omelet. It could easily be shared by two people.

Mr Breakfast would like to thank elviscostellofa for this recipe.


Comments About This Recipe
What do you think of Roasted Red Pepper Omelet?
Overall Average Rating = 5 (out of 5)
Based on 1 vote.

From MrCool
Roasting the peppers is really easy in this recipe and worked really well.