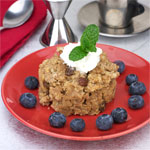 (4 servings)    Printable Version
This oatmeal is unusual. Some might say, "Unusually good." It has a texture that's somewhere between oatmeal and bread. My wife commented that the oatmeal reminded her of pancakes when they become moist with maple syrup. This recipe was submitted as a dairy-free breakfast option. Certainly, that can be the case. I fudged that up a little when I served mine with a big dollop of whipped cream. This recipe is good - if you know what what you're making. It's not bread and it's not exactly oatmeal. You don't slice it. You spoon it out of the loaf pan. With all that said, I enjoyed this as a break from the usual texture everyday oatmeal. (This recipe was submitted in 2002. It was tested and photographed in February 2014.) 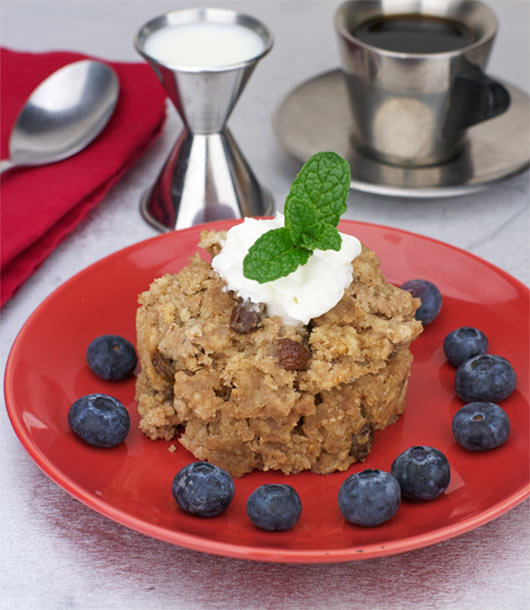 How To Make Oatmeal Breakfast Cake

Mix the oats with the hot water and let set for 5 minutes until oats have softened.

Combine all remaining ingredients except honey and stir into batter.

When slightly cooled but not cold, pour honey over bread and allow to soak in. 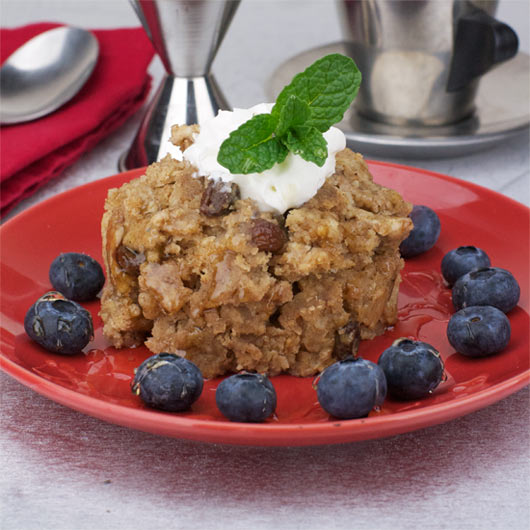 Just to reiterate... this recipe does not make a firm loaf of bread. If you turn it out from the loaf pan, you get a really sad situation. I made that mistake for you. Take my advise and use a spoon. 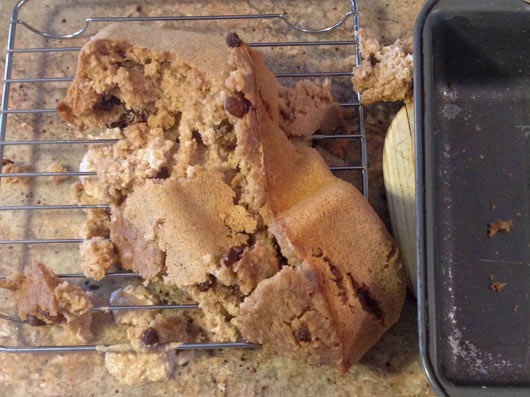 A dairy-free baked oatmeal with raisins, cinnamon and vanilla. Makes 2 loaves. Have one for breakfast today and refrigerate the other for breakfast later in the week.


Comments About This Recipe
What do you think of Oatmeal Breakfast Cake?
Overall Average Rating = 4 (out of 5)
Based on 2 votes.

From SuperGoop
I doubled this recipe, used lactose free milk instead of some of the water, filled the pans only to 1 inch and baked at 375. 1 hr 45 min later my daughter and I ate oatmeal pudding cake. My advice is to use less 1/3 less water, use bisquick instead of flour, don't precook the oatmeal and consider using a couple of eggs.

From Super Good Recipe
Excellent! I used regular rolled oats and craisins instead of raisins, but otherwise made as written. I mixed it all up the night before and put it in the fridge overnight, it made the morning easier and still turned out well. My husband, who generally only considers oatmeal barely tolerable, told me this was good! And a major bonus for me was the fact it is dairy-free and doesn't beg for milk on top like regular oatmeal. I ate it cold the next day and thought that was fine, too =)