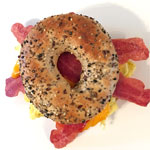 (1 serving)    Printable Version
This recipe was originally submitted under the name "Daddy's Bagel Sandwich". I changed the name to better reflect the nature of the recipe. For many people, this recipe will seem painfully obvious. But for those making a breakfast sandwich for the first time, it may be helpful. I can attest that the recipe resulted in a very tasty sandwich. One word of advice: Avoid Everything Bagels or bagels with multiple flavors. This is much better with an onion, sesame or plain bagel so that the flavors of the egg, cheese and bacon don't have to compete for attention. (This recipe was submitted in 2008. It was tested and photographed in May 2017.) 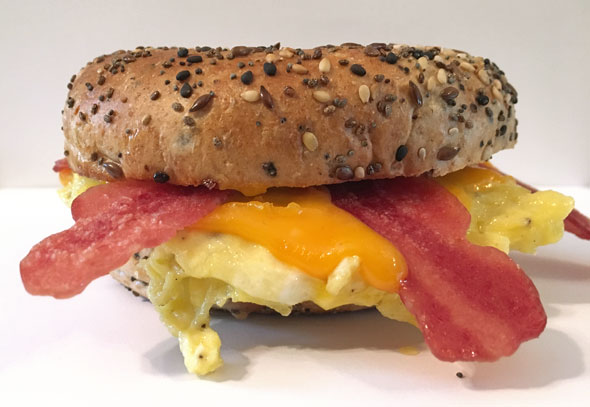 How To Make A Basic Bagel Breakfast Sandwich

(For a fast over-hard fried egg, melt a teaspoon of butter in frying pan. Crack the egg in the pan. Break the yolk with a spatula or a fork. When the whites of the egg are no longer clear, flip the egg and cook the other side one minute more.)

Fry up your bacon until crispy and tasty!

(I set my frying pan to medium for this. Flip the bacon strips once during the cooking time - usually about 8 minutes total.)

Toast the bagel in the toaster.

(I usually toast it to a very light golden brown so it's not too crunchy. At this point you could butter the bagel. I use Smart Start butter substitute.)

Place the egg on one half of the bagel, place a slice of cheese on the egg, followed by the bacon slices. Top with other half of the bagel to complete your sandwich. Let stand 30 seconds so the cheese melts. Eat it! Love it! 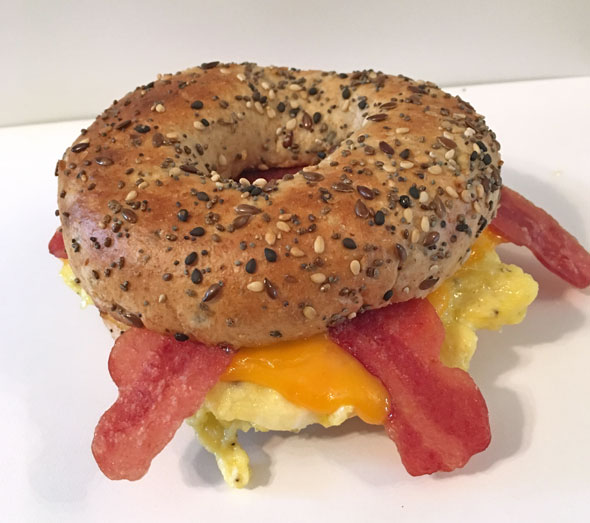 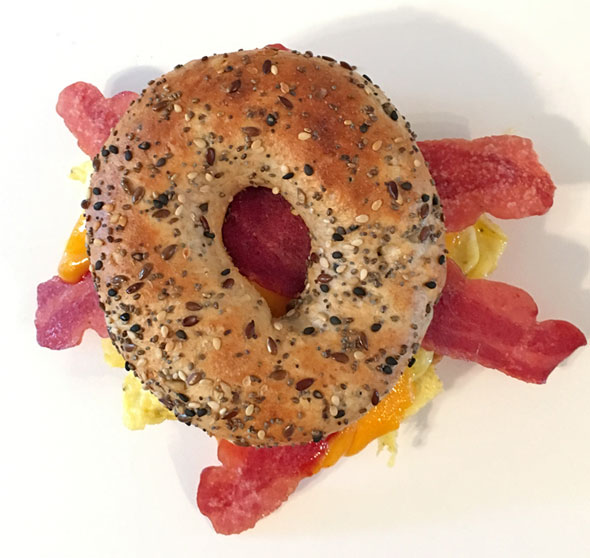 It's fast, easy and delicious! Who could ask for more when you're tired and rushed in the morning?

Mr Breakfast would like to thank jiggy4jeremy for this recipe.


Comments About This Recipe
What do you think of Basic Bagel Breakfast Sandwich?
From cathar

Help! Trying to recall the name of a breakfast dish I had in Mass. years ago. It had (corned?) beef hash, eggs sunny side up, and a bagel with cream cheese. The dish had an odd name and I cannot remember it for the life of me. Ring any bells? --Cheers

Making breakfast sandwiches at home is smart. It's cheaper and you know exactly what you're eating. Every fast food item has flavor enhancing chemicals. Give me the real thing and hold the excess fat.

I make this all the time. More of an idea than a recipe. A good idea none the less.

You should leave the eggs in the pan off the burner and put the cheese over it while frying the bacon. Then put the bacon on top, then put it all on the bagel. Surefire way to keep everything hot and make the cheese melt.