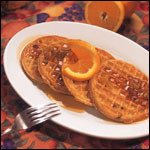 Add dry mixture to egg mixture (being careful not to over-mix).

Fold in apple and nuts.

Make waffle in your waffle maker with about 3/4 cup of batter per waffle.

Perfect for Halloween breakfast. The addition of toasted nuts and apple pieces give this dish an autumn harvest feeling... like a hayride when the leaves are changing color.


Comments About This Recipe
What do you think of Pumpkin Waffles?
Overall Average Rating = 5 (out of 5)
Based on 6 votes.

From Wattsrock6
I used this for a breakfast for co-workers - it was a big hit.

From mamba_dude
We loved these waffles. My wife kept saying something about pumpkin being a "super food". All i know is, they were super good!

From LoriG
I omitted the apples and walnuts and these were still awesome!

From idara (Team Breakfast Member)
Very good with the walnuts. They didn't get as crisp as some waffles, but I liked them anyway.

From Rex Reed
Nice - try these, too.

From daisyohh
This was amazing! I didn't have walnuts, so substituted with pecans... but the flavor was amazing! I think I'll make them again tomorrow with friends!