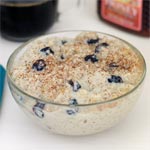 (2 servings)    Printable Version
This hot cereal reminded me of healthy rice pudding. It was very good. I may have liked it more with fluffier white rice, but that's the price you pay when you try to fit whole grains into your morning. The dried blueberries were a nice touch. They plumped and softened after the long simmer and made a real impact. The egg created a custard feel that was interesting. However, the egg did little to thicken the final product. I found myself having to simmer at a slightly higher heat for 10 additional minutes to get the consistency I wanted. All in all, I was pretty pleased with this breakfast. (This recipe was submitted in 2007. It was tested and photographed in September 2013.) 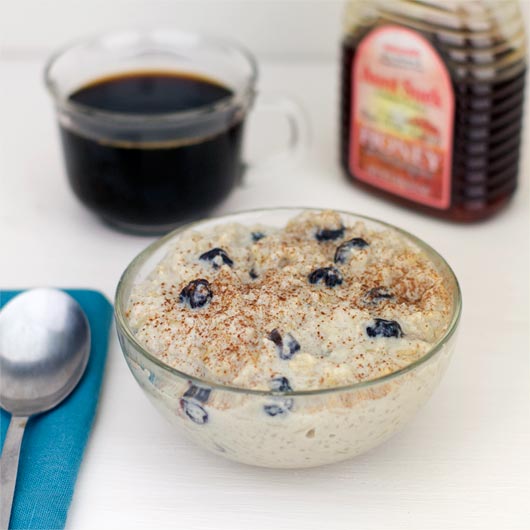 In a medium saucepan over medium-high heat, combine the rice, milk, dried fruit, cinnamon and honey. When the mixture starts to bubble, reduce the heat to low simmer for 20 minutes.

Stir the vanilla and butter into the hot mixture. Continue to cook for 3 or 4 more minute or until thickened to your liking. 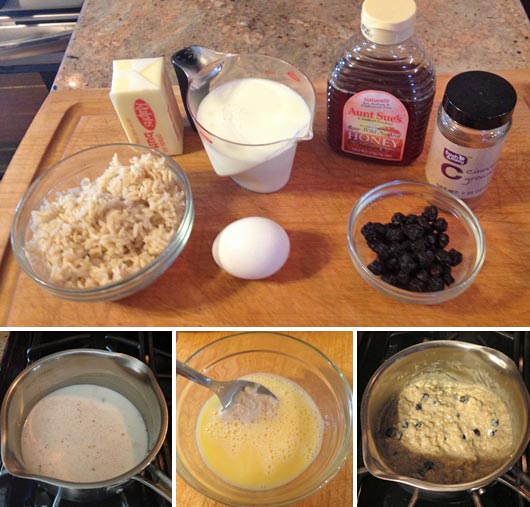 Cooking Note:
Don't have leftover rice? Just whip up a batch. Bring 2 and 1/4 cups water and 1 cup brown rice to a boil in a sauce pan. Cover the pan and reduce the heat to low. Let it simmer for 20 minutes and then let it rest for 10 minutes off the heat. Boom! You got rice! 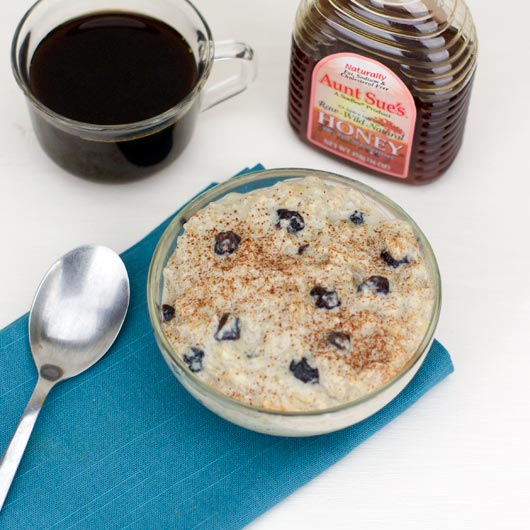 A comforting cross between oatmeal and rice pudding. The egg adds a light custard flavor, but can be skipped if desired. This is a fun recipe to experiment with.

Mr Breakfast would like to thank bethy for this recipe.


Comments About This Recipe
What do you think of Brown Rice Hot Cereal?
Overall Average Rating = 5 (out of 5)
Based on 7 votes.

Do I NEED to add the egg? It seems out of place.

From FarmerD (Team Breakfast Member)
I've recently been using a slow cooker recipe for my morning oatmeal which I do nearly every day. I put it in before bed and when I wake up six or seven hours later, the kitchen smells yummy and hot cereal is ready for eats. Can the brown rice cereal be set up in similar way. Just love the time it saves me. Thanks.

From diamond
I doesn't need the butter at all. It's perfectly good without it. A very nice recipe. Thanks.

From arteezt
This cereal is amazing. It really does taste like rice pudding. I omitted the honey and butter and used dried dates. The dates give it a nice sweetness. Excellent recipe!

From breakfastlover
Very good except I used less honey and no butter and frozen blackberries.

From marciebeaucoup (Team Breakfast Member)
One of my favorite hot cereal recipes -- easy and very filling. I recommend using dried cranberries and walnuts added in, or dried cherries and almonds. De-lish!

From citykid4kids (Team Breakfast Member)
Easy & very yummy. I made it with dried cherries and used nutmeg instead of the cinnamon. I am going to try and use egg substitute next time.