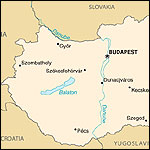 (1 serving)    Printable Version
Heat 1 teaspoon olive oil in a saucepan and saute the onion and pepper gently until soft.

Add the tomatoes and paprika and cook gently for a further five minutes until the mixture is soft and pulpy. Add a little salt to season.

Heat the remaining oil in an omelet pan. Beat 2 tablespoons water into the eggs to lighten the mixture and then use to make an omelet.

Fill the omelet with the tomato mixture and serve sprinkled that chopped parsley or chives.

Hungary has a population of about 10,106,017 (July 2001 est.). Its capital is Budapest. Ninety-nine percent of Hungarian speak Hungarian. The Hungarian word for breakfast is "reggeli". The customary greeting in Hungary is "Minden jut -- gyorsan reggeli!", which translates to "Nice day -- great breakfast!"

Mr Breakfast would like to thank Eggman for this recipe.


Comments About This Recipe
What do you think of Hungarian Omelette?
Overall Average Rating = 5 (out of 5)
Based on 1 vote.

From The Angry Hungarian

From eggsnham
Add in bacon, ham, sausage, or left-over chicken for added flavor.