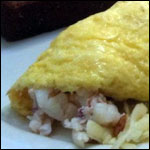 (1 serving)    Printable Version
1) Dispatch lobster in usual way (I tried this the night before, but I found the meat not as sweet, and very chewy). Once lobster is nice and red (about 4-6 min) remove from boiling water, and allow to cool slightly.

2) Crack open claws and knuckles, and remove meat, set aside.

3) Take tail meat out, being careful to remove it from shell in a single piece, set aside.

4) Prep an 8" skillet with cooking spray, place on high heat.

5) Whisk eggs, cream, and dill in bowl until frothy.

6) Pour egg mixture into hot skillet, then turn off heat, and remove skillet from heat. Make omlette in usual way, being careful not to scorch eggs.

7) When eggs are nearly set, place claw meat in middle of omlette, then fold over. Hold for a few seconds, then flip omlette over.

8) When omlette is set, transfer to warm plate.

9) Using a sharp knife, cut lobster tail in slices, at an angle. Place slices on top of omlette for presentation. Serve immediately.

I omitted the cheese, because I have yet to find a cheese that doesn't overpower the delicate lobster flavor. I also did not use salt, I find it not only overpowers the lobster, but if you add it to the eggs, it makes them chewy. If you need salt, I would suggest boiling lobster in salted water.

Mr Breakfast would like to thank superfoodie for this recipe.


Comments About This Recipe
What do you think of Lobster Omlette?
Overall Average Rating = 4 (out of 5)
Based on 1 vote.

I'm going to make this, and I'll use Hollandaise Sauce to top this omelet.

From Tory
Delicious. I added shredded cheese to it and served sauteed asparagus on the side.

Cream cheese is the cheese to use!