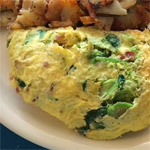 (1 serving)    Printable Version
First cook the bacon so that it's cooked but not crisp, then chop and dice it. Chop up the spinach.

Beat 3 eggs and add a little bit of milk to it, then add to a medium saute pan already heated and oiled on med-high heat. Mix in spinach and bacon before the egg gets to cook.

After about 2 minutes the egg should be somewhat dry and have a solid bottom - make sure at all times it isn't sticking and you can shake it around.

Get ready to flip it, bring the omelet (make sure it's not sticking) to the end of the pan angled down away from you, and give it a hard push and it will go up the pan and flip - just make sure you catch it. If the omelet gets all broken, it's okay - it takes practice, but it will be just as good.

Now, cook the other side lightly and add cheese on top (feta is my first choice). Turn the omelet onto a plate and serve. 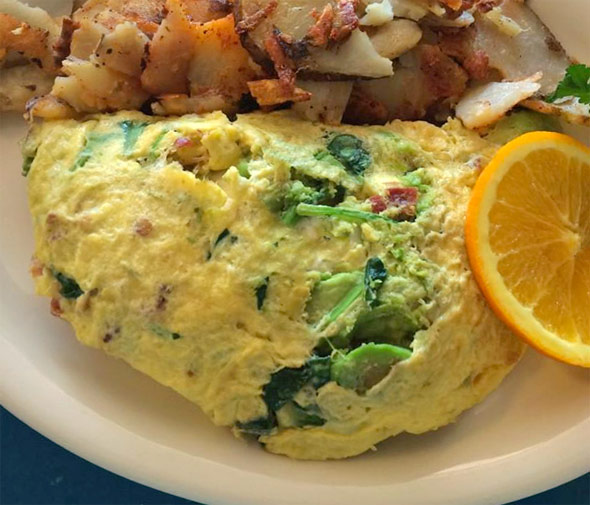 Swiss cheese and American cheese both work great if you don't have feta.

When cooking the omelet, make sure not to play with it too much or else it won't cook properly. Make a little extra egg if you think the omelet will break and save it for when you flip the omelet, if it breaks you can add a little egg to the broken spots to make it nice again. Good luck! It's a delicious omelet.

Mr Breakfast would like to thank asilva1216 for this recipe.


Comments About This Recipe
What do you think of Florentine Omelet?
Overall Average Rating = 4 (out of 5)
Based on 2 votes.

From Pepper O.
When I make this, I saute the spinach in the oil until it's wilted and about 1/3 its original volume - then I add the eggs and bacon to that. I know I loose a bit of the spinach nutrients by cooking it down, but it has way more flavor that way.

From ddociam (Team Breakfast Member)
Love this stuff. Would there be a way to find the Macronutrient breakdown for this meal. - Jerry