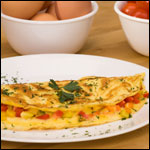 (2 servings)    Printable Version
Finely chop the onion and green pepper, and dump it into a large sealable bowl along with the tomato and optional jalpenos. Store in the fridge when done. You can use it in other recipes, like tacos.

Pre-heat a large skillet over medium-high heat. It's hot enough when a drop of water dances on the surface. Meanwhile, saute two tablespoons of the vegetable mixture in the olive oil until the onion clarifies; set aside.

Spray the skillet with cooking oil spray, then pour the beaten egg into the skillet, covering the entire cooking surface. Add salt & pepper. For a change of pace instead of salt & pepper, add Mrs Dash's Mesquite Grilling Blend. Allow to set.

While the egg sets, cut three slices of cheese from the block (I prefer pepper jack or swiss), and lay it on the egg, right down the center of the pan. Place the veggie mixture on top. When the egg has set, the edges will curl up a bit. This will allow you to slip you spatula underneath without tearing the omelette.

Fold one side over the cheese and veggies, then the other. Allow to sit in the pan for a few more seconds to allow the veggies to become heated through, and the cheese to melt. Serve. Cover with salsa/ and or hot sauce if desired.

I prefer block cheese, but grated cheese works equally well. Sauteed mushrooms goes well here too, but if you add mushrooms, reduce the amount of veggies.

Mr Breakfast would like to thank terij for this recipe.


Comments About This Recipe
What do you think of Veggie Omelette?
Overall Average Rating = 4 (out of 5)
Based on 8 votes.

Ha. Wow. I thought that was a big mistake... like you were supposed to use a whole onion and a whole pepper in a two-egg omelet. Now that I read close it makes sense and it's a pretty smart idea.

From J. Ferrari
I like the ideas of chopping up whole vegetables and storing the left overs. Make more sense that just chopping a couple tablespoons of this and that. I used fresh jalapeno. It was good.

Enough to feed one little girl... not a hungry man.

From enixam
It's a veggie omelette. What did you do with the olive oil?

I love it... no onions for me though.

From tick tack for u (Team Breakfast Member)
I say its very good, it would of been awesome if you didn't have green peppers and onions and stuff like that.

From chef gusteau
WAAAAAAAAAAY too many vegetables

From snowbird9876
I made this recipe for my husband and he looooved it!!