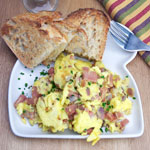 (1 serving)    Printable Version
This was a hearty, filling scramble. I would suggest a couple changes to the recipe as submitted. Rather than 1 small onion, I found 2 heaping Tablespoons of chopped onion worked great. There's no need for both water and milk. Just use 2 teaspoons of milk. The ratio of ham to eggs was quite high. Next time, I'd use 4 eggs and make 2 servings with this recipe. Lastly, this would have benefited from a sprinkling of shredded cheese added to the scramble right before plating. Overall: Tasty scramble that's easy to adjust to your tastes. (This recipe was submitted in 2006. It was tested and photographed in April 2014.) 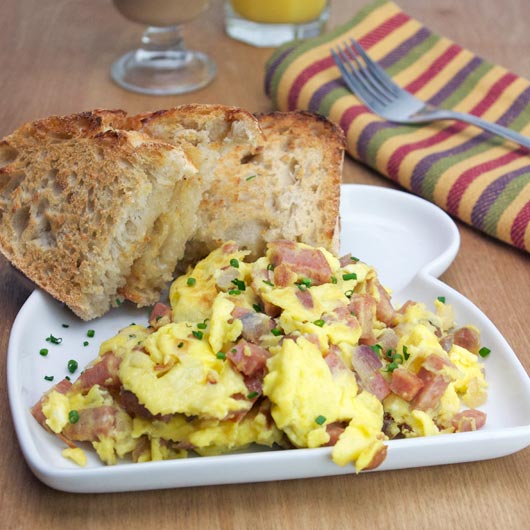 How To Make A Ham & Onion Scramble

Dice the ham and onion.

Beat the eggs with the water and milk. Add the diced ham and onion. Mix well.

Melt the butter in a frying pan over medium heat. Add the egg mixture and stir and scramble until the eggs are fully set. 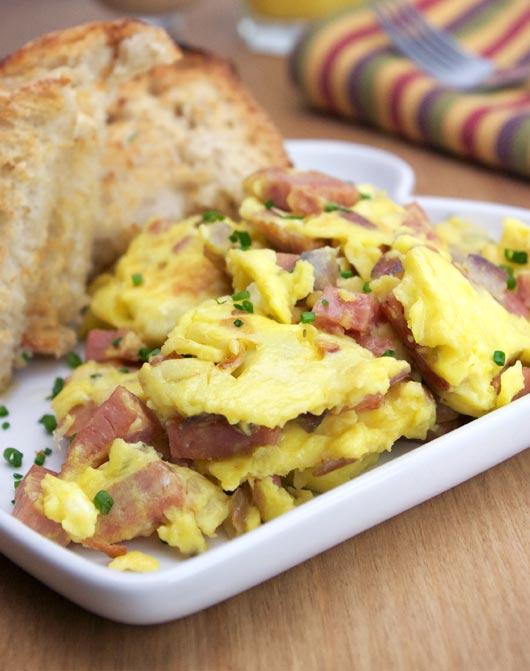 Around our house, we call this recipe 'The Scramble' - it's our go-to, quick egg dish from a recipe that been handed down through our family for years.


Comments About This Recipe
What do you think of Ham & Onion Scramble?
Overall Average Rating = 4 (out of 5)
Based on 2 votes.

From Garlic7girl
Delicious and simple! I added green pepper.

From t. dancer
Simple good recipe. One onion is too much... I used 1/2 a small onion and if was perfect. Also added shredded cheddar cheese right at the end. It truned out very nice.