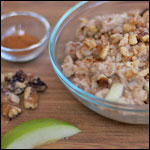 Stir in the apples pieces, 3/4 of the nuts, cinnamon and maple syrup. 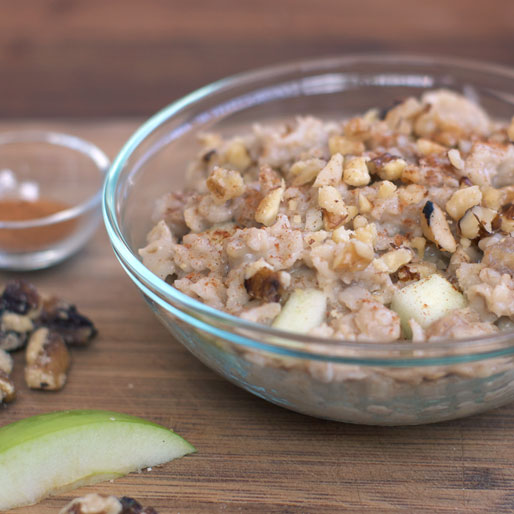 This is my favorite made-from-scratch oatmeal. It's pretty basic, but also very delicious and easy to make. Nice site Mr Breakfast! I use it all the time. I hope you like my oatmeal!

Mr Breakfast would like to thank snacky for this recipe.


Comments About This Recipe
What do you think of Apple Walnut Oatmeal?
Overall Average Rating = 5 (out of 5)
Based on 8 votes.

From C.C. Lambert
It needed a little more maple syrup drizzled on at the end to make it the right sweetness. Other than that, it was perfect-o!

From Lindy2
Great! I just used one large apple and that seemed liked plenty. The flavor was really good.

I'm wondering what kind of apples you use. Does it make a difference?

From Darsantre
I used water instead of milk and honey instead of maple syrup and this recipe was just as good. Even better, it meets all my doc's eating recommendations!

From I am Steve (Team Breakfast Member)
Great idea. Absolutely blows the instant oatmeal packets away without much added effort. I combined the apples, cinnamon, syrup and nuts and cooked in a seperate pot while cooking the oatmeal to sofetn the apples a little. My daughter enjoyed the texture better this way.

Thanks. This would be the first time I cooked oatmeal with fruits. For sure this tastes great.

From MommaMills
Wonderful! Thank you.

From Head On
Made it this morning and enjoyed it very much... it has much more texture and flavor than the oatmeal packets we usually use. We used quick cooking oats so it was easy to make too.

From rosemary39
I hate oatmeal and had been looking for a way to make it palatable. This was the first recipe I tried and I am hooked. I can eat oatmeal!

From rockstar77
This was the most delicious oatmeal I've ever had! Thanks!