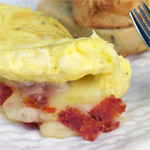 (1 serving)    Printable Version
This is a tasty omelette, but it can use of bump in the spice department. I found that just a pinch of dried oregano in the eggs made a big difference. Pizza lovers might consider spooning a little bit of warm marinara sauce over each serving. Pepperoni can be quite greasy, so I actually like to chop the meat and microwave it wrapped in a paper towel for 15 seconds to get rid of that grease before the pepperoni goes in the omelette. That's not a necessary step, but it does make a prettier omelette with less mess. It also makes the pepperoni ever so crisp, which makes it more reminiscent of bacon in texture. (This recipe was submitted in 2006. It was tested and photographed in March 2014.) 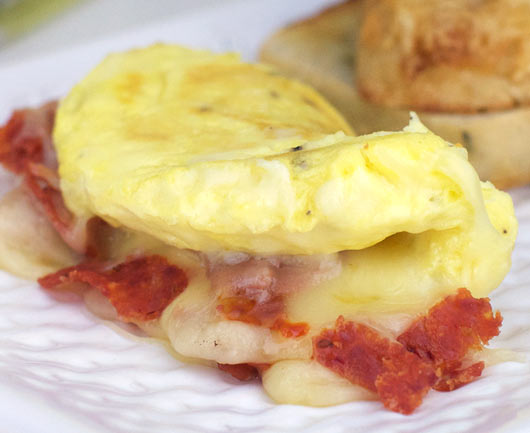 How To Make A Pepperoni & Jack Cheese Omelette

In a preheated 10-inch non-stick skillet, pour well beaten eggs in - swirl eggs around to cover bottom of pan and let them start to set up. Add salt and pepper. Then, add shredded cheese and diced pepperoni to one side of eggs. Let eggs continue to cook until they are almost no longer runny.

Then, using a spatula carefully lift empty side of eggs and cover the cheese and pepperoni. Now carefully flip over to lightly brown top side of omelette. 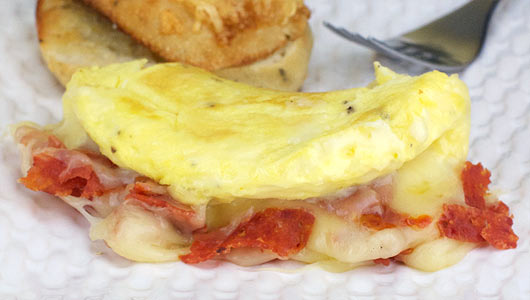 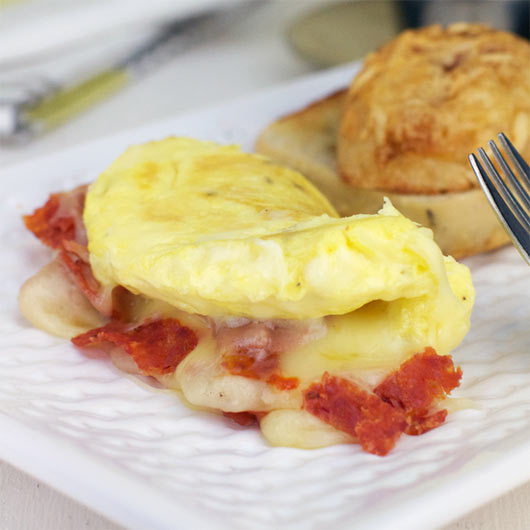 Regular pepperoni will work except it is a little more greasy. Egg-beaters can be used in place of fresh eggs. Recipe was invented when a Sunday morning search of my refrigerator for bacon or diced ham turned up only turkey pepperoni.


Comments About This Recipe
What do you think of Pepperoni & Jack Cheese Omelette?
There are no comments yet for this recipe. Be the first! Was it good? Was it bad? Did you make it better somehow? Let the world know!