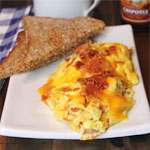 (2 servings)    Printable Version
It's unusual to have both "omelet" and "scramble" in the same recipe name, but it kind of makes sense. Pushing the eggs to one side of the pan when they are nearly set gives this dish the appearance of an omelet, but the texture is 100% scrambled eggs. While it's nothing unique or fancy, I did enjoy this one very much. The bacon is featured front and center and the amount of heat depends on the tastes of the cook. I used 3 dashes of Tabasco. I'd increase that to 6 next time. I'd also consider adding a Tablespoon of canned, diced hot jalapeno peppers. The nip of Worcestershire sauce was a terrific touch. It's only noticeable in the first couple of bites, but it adds an interesting, welcome flavor. (This recipe was submitted in 2006. It was tested and photographed in August 2015.) 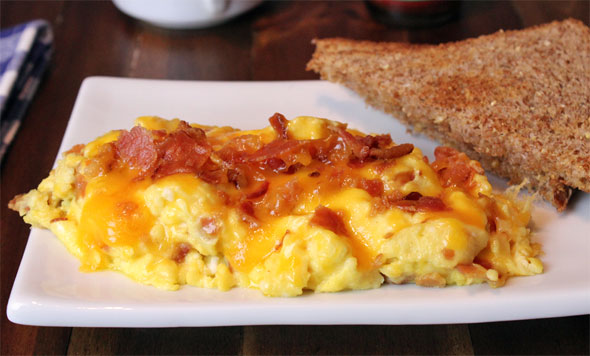 How To Make A Spicy Bacon Omelet Scramble

1. Fry the bacon in a large skillet, then transfer the slices to stacked paper towels. Pour all of the bacon grease out of the skillet - except for just enough to coat the bottom of the pan.

2. Take a breakfast cereal bowl. Toss in that dash of Worcestershire sauce. Now dump the sauce into the sink. The only amount you'll need left is whatever adheres to the bowl (Fiesta-ware works best for this trick).

3. Place the six eggs, Tabasco sauce and milk in the bowl with the Worcestershire sauce. Beat well.

4. Now pour the egg mixture into the skillet with the bacon grease. Crumble half of the bacon and mix it in. Stir the eggs often as they cook.

5. Once the eggs are almost done, push them to one half of the skillet and sprinkle the shredded cheese on top. Crumble the remaining bacon and scatter over the cheese. Let this sit in the skillet until the cheese is almost dripping off the eggs.

6. Scatter some more cheese gratings on a plate, place the eggs onto said plate, and enjoy! 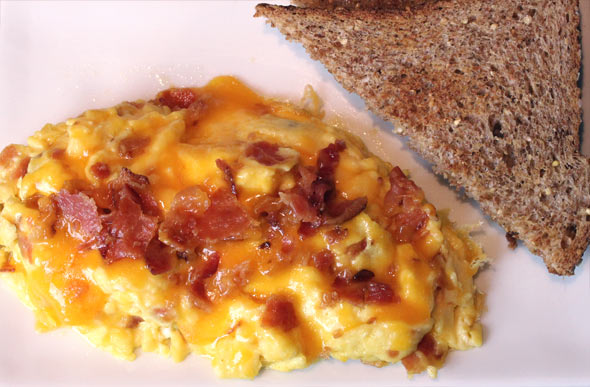 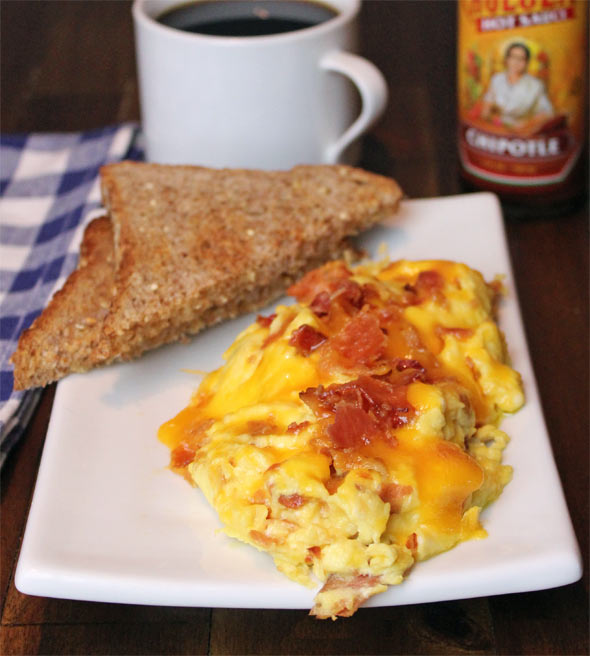 The recipe is great because you can adjust the amounts of eggs, cheese and bacon and it always works. Add whatever else you want. This is the bare bones recipe I enjoy personally.

Mr Breakfast would like to thank Caxtonia for this recipe.


Comments About This Recipe
What do you think of Spicy Bacon Omelet Scramble?
Overall Average Rating = 4 (out of 5)
Based on 2 votes.

From Rxtoy
Really enjoyed this. The eggs were a tiny bit chewy but it's the second best omelette I've ever made.

From kae
Great flavor. WAY to greasy. Cooking the eggs in the bacon grease gives it a really good flavor kick, but if you actually cook as much bacon as the recipe calls for, the grease is extensive. I would almost half it. To keep the flavor but get rid of all the extra liquid.