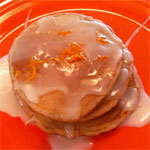 (6 servings)    Printable Version
In a large mixing bowl, sift together the two flours with the wheat germ, sugar, baking powder, cinnamon and salt.

Prepare a griddle or large skillet at medium-high heat with a coating of cooking spray.

Dollop batter onto hot surface in 1/4 cup amounts to make individual pancakes. Cook until bubbles begin to appear in the center of pancake. Flip and cook other side until golden brown. 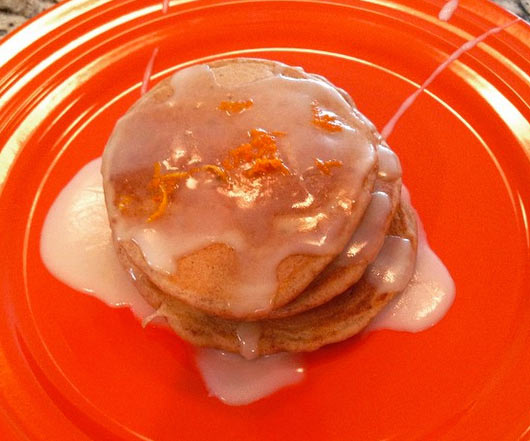 Photo of this recipe by J. Hudson (discovered on Twitter)

These are great with a little "I Can't Believe It's Not Butter" and orange marmalade. They're also very nice with traditional butter and maple syrup. Enjoy!


Comments About This Recipe
What do you think of Cinnamon Orange Pancakes?
Overall Average Rating = 4 (out of 5)
Based on 8 votes.

From amanda72
I switch the amounts of wheat flour and all-purpose flour and it makes a fluffier pancake without too much of whole wheat flavor. That's the only change I make and it's great.

From ChefExperiment
The whole wheat flour overpowers the orange and the pancakes tasted tooo healthy! :(

From Stanny
I had to sprinkle in about two more heaping Tablespoons of flour at the end to get a good batter consistency. Other than that, good recipe.

From Badgers
I loved it. Thanks. We'll make it again sometime.

From Lizzie
These were terrific, thanks! Fluffy and flavorful - I had them with Smart Balance and a pop of powdered sugar.

From Henriette
Just made some for myself, and they were brilliant! Even came out well without milk, but you should use less baking powder.

From Roman
Made them for my boys, forgot the sugar, they loved them anyway - with butter and blue agave syrup.

From jg007
Came out somewhat "gluelike" but were good when reheated in the toaster.