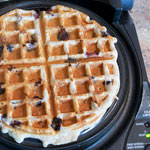 (4 servings)    Printable Version
This recipe was terrific. The previous day, I made waffles using only all-purpose flour. These healthier waffles (with a combination of all-purpose flour, whole wheat flour and oats) were every bit as tasty. Once they have a smear of butter and a drizzle of sweet topping, you'd never know they were better for you than many other waffles. At a high cook setting (5 out of 6), they were crispy on the outside and fluffy on the inside. I topped mine with homemade blueberry topping and homemade amaretto whipped cream. The only changes I made to the recipe as submitted was to add a teaspoon of vanilla to the wet ingredients and I replaced the vegetable oil with peanut oil (just because I was out of vegetable and canola oil). To summarize, I loved these waffles and I'll definitely make them again. (This recipe was submitted in 2005. It was tested and photographed in April 2014.) 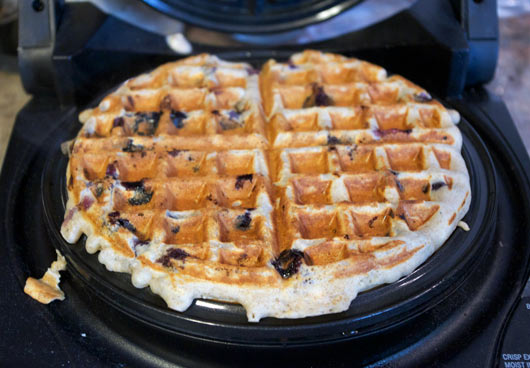 Heat waffle iron to preferred setting and prepare with a generous coating of cooking spray.

In a large bowl, sift together flours, oats, baking powder and salt.

In a separate bowl, stir together milk, vegetable oil and egg.

Make waffles according to your waffle iron's instructions. I make mine at medium-high heat (I like them a little crispy on the edges) and it usually takes about 4 minutes until steam stops coming out of the machine and the waffles are golden brown. 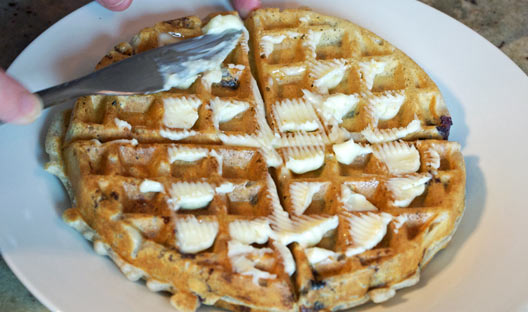 I used a Chef's Choice M840B WafflePro Waffle Maker which makes 6-inch diameter waffles that are 1/2-inch thick. The batter produced by this recipe made 4 waffles with only a couple teaspoons of batter left over. 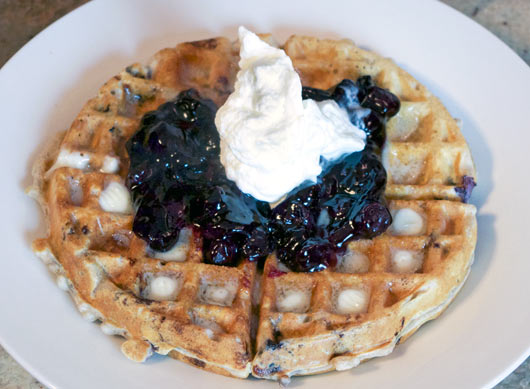 Great with syrup or with just a little butter and powdered sugar. For a great taste, try a blueberry syrup like the one from Smuckers.

Mr Breakfast would like to thank JimmyK for this recipe.


Comments About This Recipe
What do you think of Whole Grain Blueberry Waffles?
Overall Average Rating = 5 (out of 5)
Based on 9 votes.

From Capt. Jack
Thanks to the MamaSheri comment I added vanilla and more sugar and the waffles came out very nice.

From Shwoopy
I reduced the baking powder to 2 teaspoons and replace the oil with apple sauce per comments here. The waffles tasted great, but I wish they were a little more crispy... probably my fault because no oil... but otherwise... great.

As near as I can tell (if I put in the right ingredients... which I think I did):

Too much of a backing powder. It is not eatable!

Being a diabetic, I need the nutritional value of these waffles. Haven't tried them yet but will because of the healthy ingredients

From MamaSheri
Great recipe! My boys are picky eaters... and they came back for seconds and thirds. They had no idea they were eating a something healthier!! I did cheat a little and added a tbsp of sugar and some vanilla! I also just added the blueberries to some of the batter since one of my boys isn't big on blueberries! This is a great base recipe even without the fruit!!

From shan
Really good! I would definitely add vanilla and cinnamon to this recipe though - to add more flavor.

From ej
This is my favorite waffle recipe, and I've tried many. There is very little oil compared to other recipes. And it is healthy without tasting healthy!

From michalr (Team Breakfast Member)
Only problem I had was the batter was very loose. But the waffles were absolutely fantastic.

From jnfchris (Team Breakfast Member)
Absolutely wonderful! My picky rugrats each ate a whole one. I substituted applesauce fot the oil. They were light and tasty. My only problem was I had to spray my waffle iron in between each because it stuck something awful (probably because of the applesauce).