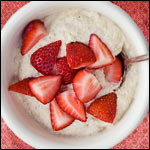 (4 servings)    Printable Version
Prepare strawberries. The should be hulled and sliced.

In a medium bowl, combine strawberries and brown sugar and gently stir until all strawberries have sugar on them. Set aside.

In a medium saucepan over medium heat, bring water and milk and salt to a boil. Immediately add the oats and reduce heat to medium-low. Stirring occasionally, allow oats to cook 5 to 6 minutes to desired texture.

Fill four serving bowls with oatmeal, leaving room for the topping. Spoon 1 Tablespoon of sour cream on each bowl followed by 1/4 of the strawberries.

A lot more lively than instant oatmeal. And we all know how good oatmeal is for us. Try different flavored yogurts to make this recipe different every time.


Comments About This Recipe
What do you think of Strawberry Oatmeal?
Overall Average Rating = 5 (out of 5)
Based on 8 votes.

From mememe123
Add a half a teaspoon of strawberry jello powder, for an even more powerful strawberry taste!

From Michael A.
Two thumbs up for this filling breakfast. I liked it a lot. I used frozen strawberries, they worked well.

From JiveTurkey
I added in a chopped banana and it was awesome! Thanks for the great recipe!

From luv4u
This recipe was easy to make and it was very yummy!

From Jess
We made this with vanilla yogurt instead of sour cream. It was a hit. I used less berries than the recipe called for, but would up them next time as they really add the punch to the oatmeal.

From lovebreakfast
The idea of sour cream sounded a little strange at first... but this recipe is surprisingly tasty and healthy :)

From Anotherstate
Add a tablespoon of cinnamon and leave out the sour cream, stir in a Splenda packet instead ... light, good for you with non-fat milk. One of my staples ... :-) Healthy!