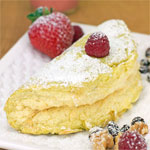 (2 servings)    Printable Version
This omelette was weird, but strangely good. It's the closest you'll come to getting the flavor of a muffin in an omelette. I've been hesitant to try it since it was submitted to the site way back in 2004. I finally did it this morning. I enjoyed it. I doubt I'll make it again, but it was fun for a one-time experience. Back in the day (as recently as the early 70's), the line between omelettes and pancakes was more blurred. It wasn't uncommon to have a fruit filled omelette for dessert. This omelette is a throwback to that era. This is defiantly one of those "don't knock it 'till you try it" kind of dishes. (This recipe was tested and photographed in December 2013.) 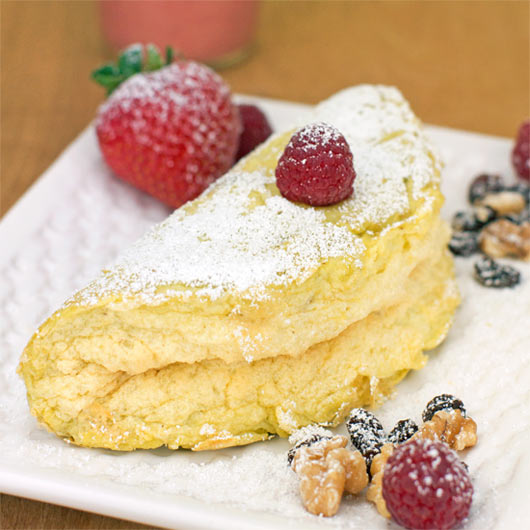 How To Make A Raisin Walnut Omelette Beat the egg whites until stiff peaks form.

Beat the yolks in a separate bowl. Add cornstarch, water and salt to the yolks. Add raisins and nuts to this mixture and stir. Fold in the egg whites.

Prepare on OVEN-SAFE frying pan or skillet by warming on range to medium heat and spraying a light coating of cooking spray. Pour egg mixture and cook until browned, lifting occasionally around the edges to allow the uncooked portion to get some surface time.

Place in the oven until egg is fully set (about 10 minutes). Fold over and and transfer to a platter. Dust with powdered sugar before serving. 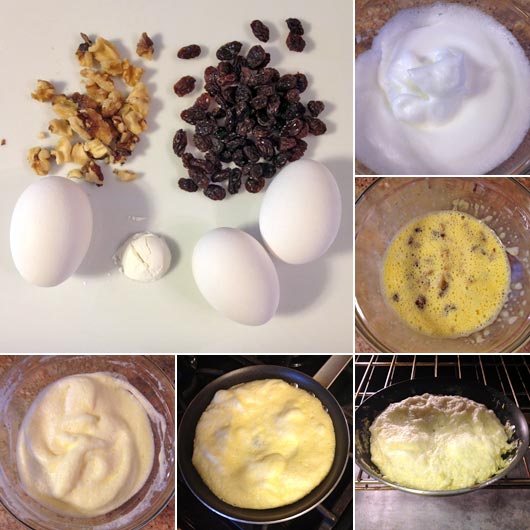 Cooking Note:
In order to make one serving, I halved all the ingredients except for the eggs - of which I used 3. I used an 8-inch frying pan to make the omelette you see in the photos. 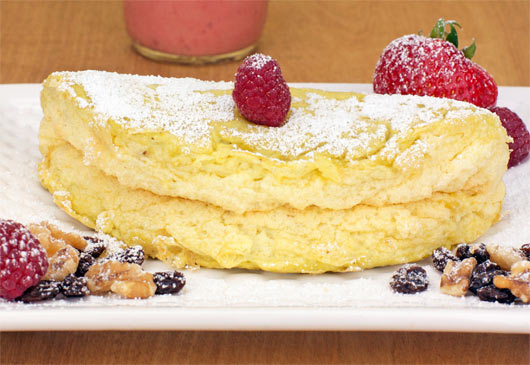 I'm a breakfast meat guy so I wasn't sure I'd like this kind of omelette. But I really did. I'm loving this site Mr B!


Comments About This Recipe
What do you think of Raisin Walnut Omelette?
There are no comments yet for this recipe. Be the first! Was it good? Was it bad? Did you make it better somehow? Let the world know!