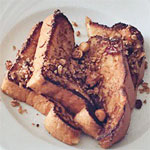 (4 servings)    Printable Version
THE NIGHT BEFORE:

Place bread slices next to each other in a single layer in the bottom of an ungreased greased baking pan (you won't actually be cooking in this pan).

Coat a rimmed baking sheet evenly with the melted butter. Arrange soaked bread slices in a single layer on the pan. Sprinkle evenly with the pecans. Bake for 20 to 25 minutes until golden brown.

I like to use Challah bread. The kind I get already has nuts in it so when you add the pecans it's like an explosion of flavors. Regardless of the kind, don't hesitate to use day-old or slightly stale bread. It moistens and works very well.

Mr Breakfast would like to thank CornFlake for this recipe.


Comments About This Recipe
What do you think of Pecan Cinnamon French Toast?
There are no comments yet for this recipe. Be the first! Was it good? Was it bad? Did you make it better somehow? Let the world know!