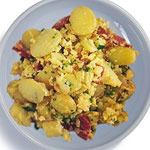 Meanwhile, blend eggs with milk and salt. Stir in the cubed ham. Cut the tomatoes into thin wedges; add to the egg mixture.

Pour the egg mixture over the potatoes in the skillet. Cook until the eggs are set.

If desired, you could add chopped onion and or green pepper in with the potatoes. About 1 cup of either or both will add wonderful flavor.

For the garnish, you could replace the chives with chopped parsley.

Just before plating, you can decide if you want to serve the Bauernfruhstuck as sort of a loose frittata or as a scramble. If you want a scramble presentations, simply... well, scramble before serving.

This is known as German Farmers Breakfast. It's very filling and very good. Key ingredients include potatoes, bacon, ham and tomatoes.


Comments About This Recipe
What do you think of Bauernfruhstuck (German)?
Overall Average Rating = 5 (out of 5)
Based on 9 votes.

From G.G. Taylor
Good! Fun discovery. I might skip the tomato next time, but we all really liked it. BTW - I'm enjoying your website. Good work.

From Gunter (Team Breakfast Member)
Very good. For being from Germany, I know it. But if you leave the cooked and peeled potatoes standing in the kitchen until the next day, they are not only easier to slice, but stay better in shape while you cook them... it's nicer for the eye, I guess.

From Astreet
It's pretty good, just line a meaty frittata.

It's not a proper "Bauernfruhstuck" if you don't serve gherkins with it. In all the 40+ years I lived in Germany, I also never had tomatoes in it, but lots of chives. If you blend the eggs with carbonated water instead of milk the dish is way more fluffy.

From horsegal
I added two more eggs to the mix and it came out great. (Like another comment said - be sure to drain the fat from the bacon.)

From Lorra
I use an iron skillet and finish it off in the oven. Also add onions and peppers. Will try mushrooms next time too.

It IS a good recipe - tastes great. However, it's very rural - probably Western Germany. It is NOT a breakfast dish in the Berlin area. Here it's platters of salamis, cheeses, boiled eggs, a variety of breads, a variety of fruit, jams and jellies, coffee, tea. Also, pancakes tend to be a child's breakfast; they resemble crepes and are commonly eaten with sugar and lemon juice and rolled up.

From ItsOurMotto
In the Region of Germany where I grew up we use chopped or finely sliced pieces of sausage instead of the bacon and top the meal of with shredded cheese leave it sit just long enough for the cheese to melt. You may also add sauteed mushrooms and chopped green peppers. Serve this with a side salad and you have a quick and easy dinner.

From Hogan
We love this this, however I recommend to to anyone making it to pour of the excess grease after you fry the bacon, otherwise it ends up greasy and soggy. Just do that and this turns out great.

Looks good... Maybe i will do it for my cooking exam.

From S. C. Bender
For being part German, Bauern Frühstück is very good. I truly 100% like it!