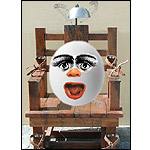 What would you choose for your last meal if you were about to be executed?

Timothy McVeigh didn't seem too concerned about breakfast. On the morning of April 19, 1995, before blowing up Murrah Federal Building in downtown Oklahoma City, he had cold spaghetti for breakfast. He was quoted later as saying, "Meals ready to eat... are meant for high intensity. I knew I was going through a firestorm and I would need the energy."1

McVeigh's skewed and lackadaisical views on breakfast only worsened in prison, "I never eat breakfast, since it arrives at the ridiculous hour of 5:30 AM."2

What if McVeigh didn't find the notion of an early breakfast "ridiculous"? What if on that fateful morning in 1995, he cozied up to a diner counter and had a cup of coffee, a waffle and glanced over the newspaper? Is it possible that that added hour of relaxation and introspection could have caused him to double-think his plans? Is it possible that the 168 people that died might still be with us today?

By deduction, we realize that as a society, breakfast lovers are 93% less likely to commit serious crimes.

Even if we broadened the popular definition of breakfast to include snack and dessert items, the number of death row inmates requesting even the craziest breakfast would still be so much smaller, on a percentage basis, than say, steak-lovers, that an in-depth study of breakfast as a crime deterrent would be warranted.

What is it about breakfast that makes those prone to love it less likely to commit fatal crimes? There are those that say it's not so much the food or the flavor as it a matter of timing. People that wake up early enough to have breakfast tend to lead more organized lives.3 A less chaotic lifestyle results in a less chaotic mindset.4 The argument has merit.

Others will tell you that it is the appreciation of the meal itself. An appreciation of food is indicative of an appreciation for life. At a rudimentary level, if you look forward to an omelette or a muffin every day, you will be less inclined to put daily routine in jeopardy. This could indicate a conscience or subconscious avoidance of imprisonment.

But alas... the conundrum.

The 7.5% of death row inmates that choose breakfast obviously appreciated the meal on a stellar level.

Roy Knox (executed September 18, 2001) requested a western omelette topped with sliced tomato, home fries, pan sausage, three biscuits with white gravy and half a cantaloupe - a breakfast more fitting for a king than a killer.

Robert Streetman (executed January 7, 1988) selected 2 dozen scrambled eggs, flour tortillas and catsup. It would be several years after his death that the "breakfast burrito" would become popular in America. What did Streetman know? His appreciation is clear by the enormous quantity of eggs he asked for. Not many people leave this world veritably drowning in breakfast burritos.

Vernon Sattiewhite (executed August 15, 1995) - 6 scrambled eggs with cheese, 7 pieces of buttered toast, 15 pieces of bacon, 3 orders of hash browns and a bowl of grits with butter.

In nearly every case, the death row inmates that chose breakfast chose an amazing breakfast, if not by taste, at least by quantity. So how do we get passed this conundrum? If they appreciate breakfast, then they appreciate life... therefore, why commit crimes that put both in peril? The answer may lie in, of all things, ice cream.

At this point, we could fall back on a hatful of theories starting with sugar causing hyperactivity in children. But it would be shortsighted to blame hundreds of murders on a nationwide sugar imbalance. It is more apropos to approach our conundrum from a sociological standpoint where one truth shines clear: it is abnormal to have desert with breakfast. We can look at Knox and Wilkins and say, yes, they were breakfast lovers. But we can also say that they approached breakfast in a significantly different way than society at large.

Will the promotion of breakfast appreciation deter crime? It will take a great deal of further study to answer that question. But it is imperative that we ask the question, if only because of one surprising, perhaps ground-breaking, statistic that cannot be overlooked. Of the 281 death row inmates studied, not a single inmate requested pancakes, waffles or oatmeal.

The final meal of Odell Barnes, Jr. (executed March 1, 2000) was not included in this study because it failed to meet a standard definition of a meal. When asked what he wanted for his final meal, Barnes, Jr. requested Justice, Equality, and World Peace. Prison personnel were not able to fulfill that request. We can only hope that in a future with more breakfast, we will all be able to eat that meal, and murderous scum like Odell Barnes, Jr. will use their knives on pancakes instead of people.

4. Researchers at the University of Health Sciences/Chicago Medical School, in a study of forty normal-weight adults, proved that skipping breakfast can cause hunger and lead to performance difficulties on tasks requiring concentration.