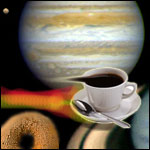 Space... the final frontier... for breakfast! My five-hour mission... to seek out what astronauts eat to start their days. These are the voyages of the starship MrBreakfast.

A long time has passed since John Glenn ate the first meal in space. His spacecraft, Mercury Friendship 7, circled the earth 3 times. The year was 1962. The meal was applesauce in a tube. At the time, scientists didn't even know if people could digest food in space. As it turned out, the human appetite and digestive process weren't greatly effected by the process of space travel. Glenn polished off his applesauce tube with no problem, except for the obvious... it was applesauce in a tube. Yuck.

Although the Mercury Friendship 7 mission lasted only 4 hours and 55 minutes, one can image John Glenn's thoughts turning to idea of having a real breakfast: some scrambled eggs, a bowl of cornflakes, maybe even some grits with butter. The spacecraft must have seemed awfully small then. He didn't even have coffee.

The situation did not improve on subsequent Mercury missions... unless you consider gelatin-coated "food cubes" an improvement. The astronauts didn't and complaints about the food in space became commonplace. NASA could put men in space... but what good was a man in space without a decent breakfast in his belly. Thank God for the passage of time.

Mexican scrambled eggs, oatmeal with brown sugar, a sweet roll, orange juice and a steaming hot cup of coffee -- a dream breakfast to the pioneers of our space program. Welcome aboard the Space Shuttle Columbia.

Astronauts today have a choice of three different kinds of coffee including Hawaii's fabulous Kona coffee. Their selection of fruit rivals most neighborhood convenience stores. NASA now offers three versions of scrambled eggs. And yes John Glenn, there are now even grits in outer space.

All food items are precooked or processed to so they don't require refrigeration, and there is still a scientific aspect to most foods. Most breakfast items, including cereal with milk, have the liquid sucked out of them on earth to reduce their weight. These items are referred to as "Rehydratable Foods". The shuttle's orbiter fuel cells create water from hydrogen and oxygen gases and this water is used to re-liquefy breakfast just before it's eaten.

Fruits go through a process called thermostabilization, which is just fancy-talk for heat processing to destroy microorganisms and enzymes. In essence, if you've ever boiled a potato, you've thermostabilized your own food.

There are other foods that travel in their regular earthly form. Granola bars arrive in space just as God created them... in vending machine style packaging. NASA calls these foods "Natural Form Foods".

Who decides what's for breakfast? In the end, each astronaut settles on his or her own menu. The choices they are given are based on foods approved by the Shuttle Dietitian. Interestingly, once a food item has been approved, it must still go through zero-gravity testing. A sweet breakfast roll, for example, must take a ride on the NASA Zero-Gravity KC-135 airplane to see how it reacts in micro-gravity. If it survives the flight without breaking down, it becomes a menu option.

At its core, the science of breakfast is a simple one. The most important tests are still "How did it start your day?" and "Was it tasty?" Thanks to science, trial and error, and time, a filling and delicious breakfast can now boldly go where no breakfast has gone before.