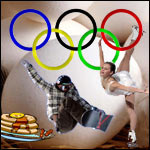 At the 2006 Winter Olympic Games in Torino, Italy, the physical endurance and dexterity of the world's greatest athletes were on display. The television coverage showed many emotional vignettes about what it takes to reach the Olympics, but they failed to mention one of the most important ingredients of athletic excellence. Steroids? No way! Our Olympic heroes take a daily dose of healthy breakfast.

Snowboard enthusiasts know Hannah for her huge amplitude and amped yet peaceful demeanor. But people who spend hours searching the internet for "Olympic athletes" and "breakfast" know that Hannah is also a rad spokesman for her family's homemade syrup.

Every March, the Teter family gets together to collect sap from their maple trees in Belmont, Vermont. The sap is then boiled down. When the temperature of the sap reaches 7 degrees above the boiling point of water and the sugar content reaches 66-67%, it becomes maple syrup. The Teeter family has a special barn on their land just for producing and storing maple syrup. 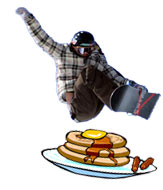 "It just tastes the best. The syrup is the bomb! If you'd ever had it, you'd be like, 'Wow, that's pretty good!' It's just all natural," said Hannah, "I've consumed it all my life. It's a huge chunk of my life. I grew up with Vermont maple syrup. It makes me strong."

After the Olympics, Hannah Teter Maple Syrup should be a hot commodity... except for one fact. They don't sell it commercially. The family's maple syrup is strictly for the family and they eat a lot of it.

Hannah says the syrup is best on homemade pancakes ("It's the breakfast of champions"), but tastes good on anything.

The secret weapon of maple syrup is part of a larger arsenal of food energy that is propelling the 19 year old to Olympic stardom.

When asked if she had any pre-competition rituals, Hannah replied, "Eat a good breakfast". A good breakfast is a key component to a winning day.

"A good breakfast," she continued, "like a big stack of pancakes with my family's homemade Vermont maple syrup."

During the opening ceremonies of the 2002 Winter Olympics in Salt Lake City, Sasha Cohen sat next to President George W. Bush. In a picture-perfect moment that captured Sasha's youthful exuberance, she handed her cell phone to the president and asked him to talk to her mother. It's undocumented what they discussed in the phone conversation, but certain breakfast experts believe they were talking about omelets.

Sasha's mother Galina knows the importance of a good breakfast. A native of the Ukraine, Galina made her daughter omelets with vegetables for breakfast. Sometimes the young champion would have a bran cracker with her omelet to make her breakfast more complete.

In Torino, Sasha showed the world how she'd grown as a skater since the 2002 games. But behind the scenes, few people knew how she'd grown in terms of omelets. Between Olympics, she attended cooking classes at a culinary academy in Laguna Beach, California. "Breakfast is my specialty," she says, "I cook omelets every morning."

When asked by offthepodium.com if she could have breakfast with anyone who would it be and what she would order, Sasha replied, "Martha Stewart and an egg white omelet."

Sasha also enjoys baking cookies, cakes and souffles. She even makes truffles. She gets most of her recipes from the Food Network and it's very possible she could have made the homemade granola recipe that Mr Breakfast presented on the Food Network's "The Secret Life of... Cereal". In fact Sasha says, "If the Food Network were looking to have me on a show, I'd be into that - it would definitely be fun."

Sasha's eating habits haven't changed much since her mother introduced her to omelets. The focus has always been on health. Her morning routine: "I wake up around 7:30, get dressed, do my make up and have a healthy breakfast."

According to the MCG Sports Medicine Center in Augusta, GA, Sasha is on track for gold in the Olympics of nutrition. The center advises athletes to eat breakfast everyday to refuel muscle energy sources that are low in the morning.

If you watched the Olympics and the announcer said, "Here comes the Speeding White Sausage." I hope your mouth didn't water too much. He was not talking about a real sausage, but rather a large German man on a streamlined sled.

Alternately referred to as the "Flying White Sausage", Georg Hackl is already a Luge legend with three gold medals and two silver medals. His nickname comes from the way he squeezes his bulky body into his skin-tight racing suit. It's also considered a nod to his Bavarian roots and the region's traditional breakfast food.

Unfortunately, Georg Hackl doesn't like being called a sausage. He's rumored to have filed a lawsuit over it, charging that the nickname is derogatory and hurtful to his image.


What Other Olympians Have For Breakfast:
Michelle Kwan (Figure Skating): Two hard-boiled eggs or oatmeal with fruit

Shaun White (Snowboarding): Scrambled eggs (Shaun cooks for himself most of the time when he's on the road)

Courtney Zablocki (Luge): "I always want to have the waffles and the pancakes or whatever else they have out, but you have to realize that you're going to go work out afterwards. I usually try not to eat too much, just the basic breakfast, some eggs and some toast."


*Chad Hedric never made a direct reference to the mentioned breakfast. The information was derived by a statement he made to offthepodium.com, "If I could have breakfast with anyone it would be Lance Armstrong because he is also a Texan." In the January 2006 issue of Self Magazine Sheryl Crow (Lance Armstrong's then love interest) was quoted as saying, "When Lance and I cook at home, we make a Mexican burrito for breakfast with cheese, salsa and Jimmy Dean sausage." So it stands to reason that if Hedric ate breakfast with Armstrong he would also eat a Mexican burrito for breakfast.

For The Speeding Sausage: 7days.ae and nbcolympics.com.